He was a poet, born into a poor household in the town of Krasne, Ukraine. He grew up in an environment of laborers and Jewish craftsmen who hadn’t lost the feel for humor, for a spicy saying and a joyous song. Driz’s poetic creations were thoroughly absorbed in this current of turbulent populism. Childhood impressions trailed after him his entire life, and he derived, as if from a living source, language, themes, and images—both at the time he was writing his playful children’s poems and when he sang his distinctive lyrical songs. Driz’s father died when he was twenty-one years old—he died, as it was told, on the sad, famous ship, Titanic. When Shike was fourteen, his mother sent him to Kiev “to become a man.” The future poet arrived in Kiev to work in the factory “Arsenal,” while studying in an art school, later in the Kiev Art Institute. He dreamed of becoming a sculptor. From his childhood on, he painted, shaped, and carved, but his actual talent revealed itself in his poetry. The poet himself loved to describe how in his childhood it was his delight to take clay from the river and shape it on the shore into bowls for the birds. One of the critics even stressed that this was where Driz earlier mastered the art of sculpture, and from there he transferred it into his poetry, and thus were formed poetry-sculptures. However, not from cold marble, for they were touching and musical.

He brought out his first poetry collection in 1930, the second in 1934, and these were followed by a major interruption. The prewar Yiddish children’s authors—such as Leyb Kvitko, Yoysef Kotlyar, and Benyomen Gutyanski—had the good fortune to hear Jewish children reading their poems in booklets and reciting them in school and at home. Shike Driz gained no such satisfaction, as he served from 1934 through 1947 in the Red Army as an officer in the border towns of Galicia: Drohobych, Przemysl, and elsewhere (the Russo-German border after the partition of Poland). Throughout this time, all Jewish schools in the Soviet Union were closed down, and all Yiddish children’s publishing of books, journals, and newspapers were liquidated. And, as such, Driz wrote no more children’s poems. He only returned to writing children’s poetry in his fifties. Then, out came pouring from him a huge amount of authentic masterpieces. His children’s poems from the 1950s and 1960s were called “Der freylekhe beker” (The happy baker), “Der shpits funem zumer” (The height of summer), “Di grine shnayders” (The green tailors), “Der boym iz aribergeforn” (The tree moved), and “Dos filkolirik yingele” (The boy of many colors). In Russian translation they were published in millions of copies; they were recited in kindergartens and schools; music was composed to accompany them; performances were staged according to his wonderful tales; and the reviewers would not crown him with anything but the name “skazochnik” (the story-teller), a term that can’t be properly translated into Yiddish—unless it would be replaced with something similar: “kishef-makher” (magician). And, although the translations were masterfully rendered, they nevertheless lost the Yiddish flavor encapsulated within them. Several films were made in Moscow from his works.  He was last living in Moscow where he died. 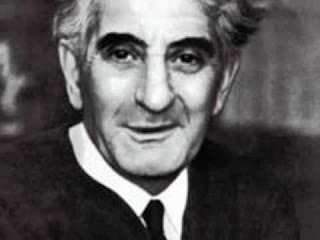