TSILYE DRAPKIN (CELIA DROPKIN) (December 18, 1888-August 17, 1956)
She was born in Bobruisk, Minsk district, Byelorussia.  She lost her father when quite young.  Until age eight she studied Jewish subject matter with the rabbi’s wife and later attended a Russian school.  She graduated from high school in Bobruisk.  She worked as a teacher in Warsaw.  In 1912 she emigrated to the United States.  She began writing poetry, at first in Russian and in 1918 in Yiddish.  She contributed poems and stories to: Di naye velt (The new world), Inzikh (Introspective), Shriftn (Writings), Onheyb (Beginning), Tog (Day), Tsukunft (Future), and Poezye (Poetry) in New York, among other such venues.  In book form: In heysn vint (In a warm wind), poems (New York, 1935), 120 pp.; In vaytn vint (In a distant wind) (New York, 1959), xi, 273 pp., poems and stories.  Her poem “Nokhamol a kush” (One more kiss) was translated by A. G. Gnessin into Hebrew and included in a novel of his.  A number of her Russian stories were translated by Kolye Teper into Yiddish in 1914-1915.  In the last years of her life, she occupied herself with painting.  She was one of the first modern Yiddish poetesses in America.  Her poems, such as “Di tsirk-tentserin” (The circus dancer), were replete with a tempestuous, joyous temperament, and with a vehement rhythm and unexpectedly stimulating imagery.  She died in New York. 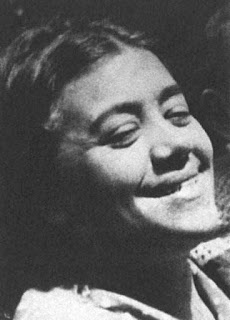