KALMEN REYZEN (1848-July 11, 1921)
He was born in Koydenev, Byelorussia, the father of Avrom, Zalmen, and Sore Reyzen.  He came from a wealthy and well-pedigreed family.  He taught himself German and received his first information in Russian from a teacher.  He was engaged in business in grain and lived for a short time in Podolia.  He later lived for the most part in Minsk, aside from 1910-1914 in Warsaw.  He began writing poetry and feuilletons (under the pen name Yakir) in Hebrew, and he even published a small collection of Hebrew poems under the title Yona homiya (Humming dove) (Berdichev, 1893/1894), 32 pp.  His first poems and sketches in Yiddish were published in Avrom Reyzen’s Dos tsvantsigste yohrhundert, zamelbukh fir literatur, visenshaft un kritik (The twentieth century, collection of literature, scholarship, and criticism).  He went on to published poetry, feuilletons, and sketches in Warsaw’s Veg (Way), Idishes vokhenblat (Jewish weekly newspaper), and Frihlings-bleter (Spring sheets) in 1910, among others.  The popular song “Hamavdil ben kodesh leḥol” (The separation between sacred and profane) was written by Reyzen and was mistakenly included in the collection of folksongs by Ginzburg and Marek, Di yidishe folkslider in rusland (Jewish folksongs in Russia), as well as in Yidishe folkslider (Yiddish folksongs) by Dobrushin and Yuditski (Moscow, 1940).  He died in Minsk.

LEYB REYZEN (b. October 20, 1910)
He was born in Grodno.  During WWII he fled to join the partisans.  In 1948 he emigrated to New Zealand and in 1973 to Israel.  He began writing for Grodner lebn (Grodno life) in 1937.  He later published memoirs, humorous sketches and polemical articles in: Oystralishe yidishe nayes (Australian Jewish news) and Yidishe nayes (Jewish news) in Melbourne, Grodner opklangen (Grodno echoes) in Buenos Aires, and Folksblat (People’s newspaper), Heymish (Familiar), and Letste nayes (Latest news) in Tel Aviv.  He was honored by Yad Vashem for his war memoirs (in manuscript).  His pen names: Ben Nosn, Reb Leyb, and A. Grodner.  He was last living in Ra’anana, Israel. 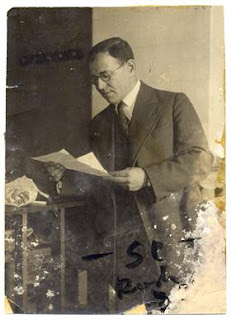 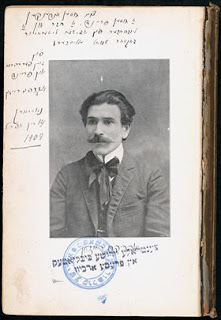