MAURYCY ORZECH (1891-August 1943)
Born in Warsaw into a wealthy Hassidic family which, over the course of time, had become a little assimilated.  He became involved with the Bund in 1905 while still a high school pupil.  In 1906 he led a labor strike and began to bring in healthy donations for the Party.  In 1907 he spent time in Cracow and was active in the Żydowska Partia Socjalistyczna (Jewish socialist party).  He spent 1910-1913 studying political science in the universities of Zürich, Paris, and Brussels.  At the same time he was active in Jewish and Polish socialist student organizations.  He was arrested in 1911 at a May Day demonstration in Paris and thrown in jail for a short period of time.  At the time of the outbreak of WWI (August 1914), he was in Bendin (Będzin).  During the German occupation of Poland (1914-1918), he devoted himself entirely to work for the Bund; together with Vladimir Medem, he belongs to the founders of the first legal Bundist weekly in Poland, Di lebens fragen (Questions of life) which began publication on February 4, 1916 in Warsaw, and he became one of the closest contributors to it and for a few months in 1917 also the editor.  In 1917 he was a member of the Warsaw committee of the Bund, and from 1919 to 1927 a Warsaw city councilor.
From 1918 he was a contributor to Bundist daily newspapers and journals in Poland, both in Yiddish and Polish.  In 1920 he was the editor of the Bundist daily, Arbeter shtime (Voice of labor), closed down by the authorities in April 1920.  In 1920 he was the Warsaw correspondent for the Forverts (Forward, New York).  On the whole he wrote about economic questions and major labor issues such as in Statistishe arbet vegn di yidn in der velt (Statistical work concerning Jews in the world) which he published in Arbeter luekh (Labor calendar) for 1920 and 1921.  He was the director of the Socialist Artisans Union in Poland, 1934-1935, leading the struggle against the government’s plan to institute an anti-Semitic guild law in the country.  In 1936 he was selected one of the heads of the Warsaw Jewish community and of the community management committee; and in 1937 a member of the executive of the national council of trade unions.
The war found him far away in September 1939 in Kovno, and from there he sent news practically every day by telegraph to the Forverts in New York.  For one such telegram (concerning an anti-Jewish pogrom in Vilna), he was arrested by the Lithuanian government.  His friends in Kovno enabled that he not be sent to the German border.  They were successful in obtaining a visa for him from the British consul.  There was no direct communication with Great Britain at the time, but they found a place for him on a ship that going to Sweden.  The ship was, however, detained by the Germans who arrested him and put him in a Berlin prison, and from there he was sent on to a camp for prisoners of war.  He was freed from the camp in April 1940, and he returned to Warsaw.  And, there he plunged right back into underground work in the ghetto, following the central committee of the Bund in the management of the Jewish Self-Help Organization, and he took part in all the meetings aimed at organizing an uprising.  Together with Abrasha (Abrasza) Blum, he published in the ghetto six underground newspapers: Der veker (The alarm) and Tsayt-fragn (Issues of the day), among others, and two newspapers in Polish.  Among hundreds of their articles was as well a call to support an uprising soon (Der veker, Warsaw, no. 13 of April 30, 1942).  In August 1942, according to a decision of the central committee, he went to the Polish side and established contact with the Polish underground movement as well as with the secret representatives of the Polish government in London, and through them with the Jewish public in the United States.  His covert names at the time were Janczyn and Jankowski.
At the end of 1942, he was ready to extricate himself and go abroad.  In January 1943 he was already at the Polish-Romanian border, but he was arrested in the city of Kolomaye, and he was returned to Warsaw.  In August 1943 he was killed by the Gestapo.  His wife, Yanke, and his only daughter perished later. 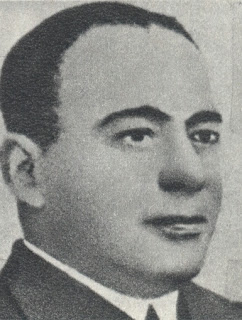