NISN DRANOV (1884-September 20, 1920)
He was born in Fundakleevka, Kiev region, into a religiously observant family.  He studied in religious primary school, yeshiva, and was an assistant to the cantor Nisn Belzer.  At the age of eighteen, he left home with a wandering Italian opera troupe and later attached himself to the Yiddish theater.  He acted with the most important troupes of Russia and Poland.  He was the author of: Der meshugener in shpitol, dramatisher etyud in eyn akt (The crazy man in the hospital, a dramatic study in one act), adapted from Gogol (Warsaw, 1909), 13 pp. and (New York: Maks N. Mayzil, n.d.), 7 pp.; Di nakht fun zelbst-mord, oder vos iz der tsil fun lebn? (Suicide night, or what is the goal of life?) (Warsaw, 1914), 14 pp.  He was in Minsk when WWI broke out.  He later traveled across Russia.  In 1917 he arrived in Harbin in the Far East, became ill there, and after three years in a hospital for the mentally ill, he died. 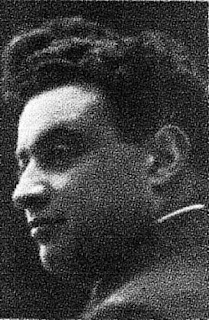