ALTER DRUYANOV (AVROM-ABE OSHER) (July 6, 1870-May 10, 1938)
He was born in the town of Droye (Druja), Vilna region, son of the town rabbi, R. Peysekh-Elyokim (Getsl) Droyanov, a descendant of generations of rabbis; and his mother, Tile-Treyne, was the daughter of a major Hassidic figure, R. Khayim son of Shimen Vayler, rabbi of Pandėlys.  He studied in religious elementary school, synagogue study hall, as well as with his father and grandfather.  At age seventeen he began studying at the Volozhin yeshiva.  He was a student there of R. Hirsh Leyb Berlin (the Netziv) and of Khayim Soloveytshik, and later studied in Kupishok (Kupiskis), Kovno district, with the Kovno rabbi, R. Abe Yankev Hacohen Brukhov.  At age twenty-one he left for Breslau, Germany, to study at the university and the rabbinical seminary there.  His friend from the Volozhin yeshiva, Mikha Yosef Berdyczewski (Berdichevsky), who was also at this time studying in Breslau, dissuaded him from doing so, and he returned home and plunged into their iron business.  His literary activity began in Hebrew, under the pen name “Avigad,” with a feature piece entitled “Zikhronot verayonot” (Memoirs and ideas), published on the eve of Tisha b’Av, 1890, in Hamelits (The advocate).  From that point forward, he contributed features and articles to various Hebrew publications.  He signed his works in Hebrew and in Yiddish with such pseudonyms as: Abba, Avigad, Eliezer Kupidman, Dr. Retle, Dr. Taler, A. Karmeli, A. Dov, A. Rom, Alef, and A. Treynin.  In 1899, after his iron business burned down, he left for Odessa and later to Dvinsk (Daugavpils), where he engaged in the timber business.  He was not successful in this either, and thus he returned to Odessa and was secretary to “Ḥoveve Tsiyon” (Lovers of Zion) there until 1905.  Over the years 1906-1909, he lived in Israel.  When he returned he settled in Vilna, and there he served as secretary for the Zionist Organization in Russia.  From 1909 he served as editor of the Zionist organ, Haolam (The world), initially in Vilna and later in Odessa.  With the eruption of WWI, when Haolam was shut down, on assignment for the Odessa aid commission for Jewish victims of war, he traveled over the course of a year to Jewish settlements in Galicia, Poland, Podolia, Volhynia, and Bessarabia.  He later published his impressions from these travels and the aid work for Jewish war victims in Reshumot (Records), which he (together with Ḥ. N. Bialik and Y. Ḥ. Ravnitski) founded in Odessa and for which served as editor.  He debuted in Yiddish in Peretz’s Yontef-biblyotek (Holiday library).  He published a series of feature pieces in Yud (Jew), entitled “Bletlekh fun a kremers togbikhl” (Pages from a shopkeeper’s diary) and written under a pen name, and with feature pieces under the pen name “R. Y. Shik.”  Using the pseudonyms Eliezer Kopidman and Shin, he published in Fraynd (Friend) in 1903 and a series of letters from his travels to Israel, and in 1906 he published in Dos yidishe folk (The Jewish people).  In 1912 he published a collection of several hundred Yiddish proverbs and expressions in Fraynd.  He published his remaining works in the field of Jewish folklore in Hebrew in Reshumot 1 (1919) in Odessa, 2 (1922) in Jerusalem.  In 1919 the first volume of his Ketavim letoldot ḥibat-tsiyon veyishuv erets-yisrael (Writings on the history of the Ḥibat Tsiyon [Lovers of Zion] Movement and settling the land of Israel) in Odessa, 852 pp., and he continued the editorial work on subsequent volumes of this important work in Israel.  In 1921 he made aliya to Israel and was living in Tel Aviv.  He was active there in organizations and institutions.  In 1932 he traveled on assignment from the Jewish National Fund through Poland and Lithuania, and published his travel account with the title Tsiyonut befolanya (Zionism in Poland) (Tel Aviv, 125 pp.).  In 1933he became editor of Sefer tel aviv (The book of Tel Aviv).  Sefer habediḥa vehaḥidud (The book of humor and witticisms) (Tel Aviv, 1935-1938) in three volumes, in which he published 1400 Yiddish jokes, with an important treatises on Jewish humor is considered his crowning work.  Over the years 1934-1935, he edited Miyamim rishonim (From the days of the earlier scholars).  He was considered one of the finest journalists.  He contributed pieces to Haarets (The land), Doar hayom (Today’s mail), Davar (Word), Bustanai (Gardener), and Haboker (This morning), among others.  He died in Tel Aviv. 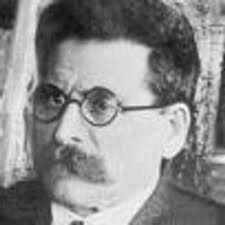