MENASHE ILYER (1767-July 1831)
Born in Smargon (Smarhon, Smorgon) in the Vilna region.  His father Yoysef was a rabbi’s assistant.  He was a forerunner of the Jewish enlightenment movement, as well as a student of the Gaon of Vilna.  From all manner of medieval religious texts and also modern writings, he acquired a considerable knowledge of general subjects.  He looked in his Hebrew texts to improve and reform Jewish life at the time and was sharply rebuked for it.  He wandered a great deal and lived in penury.  A portion of his manuscripts were destroyed.  In Yiddish he published the first volume of a religious work entitled Lebnsmitl (Way of life) (1823).  He published this work together with the text in Hebrew entitled Sama dechaye.  His plan was the print the book in separate volumes, but he did not have time to produce more than a single volume.  He died in Ilye (Ilya), in the Vilna district, where he had mostly lived. 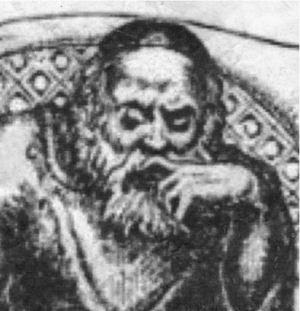