DOVID AYZENSHTAT (September 16, 1890-1942)
Born in Nashelsk (Nasielsk), Poland.  Until age thirteen, he studied Jewish subjects.  In 1907 he studied music in Berlin; in 1909, he was chorus conductor at the Great Walled Synagogue in Homel (Hamel, Gomel); 1912-1916, he was in Riga.  From 1921, he was in Warsaw.  He was a composer and choir conductor at the Tłomackie Synagogue.  He wrote music for Jewish prayers and for Leyvik’s Golem (staged in Warsaw’s Polish Theater).  He conducted the choir at the performance of An-sky’s Dibek (Dybbuk) at the Warsaw Opera in 1935.  He published articles concerning Jewish music and cantorial art in Di khazonim-velt (The world of cantors), Di shul un khanozim velt (The school of the synagogue and cantors) in Warsaw (1933-1939).  Together with A. Prager, he wrote and published the Algemaynes muzik-leksikon in heftn (General music encyclopedia in copybooks) (Warsaw, 1935-1936).  He lived in the Warsaw ghetto.  In 1942 he was sent by the Nazis to Treblinka. 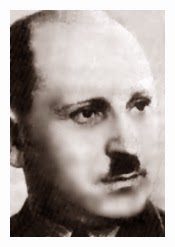