YITSKHOK GITERMAN (1889-January 18, 1943)
He was born in Hornostaipil (Hornostopol), Kiev region, Ukraine, into the “court” of his grandfather, R. Mordechai Dov Ber Twersky.  He studied in religious elementary school, synagogue study hall, and secular subjects with private tutors.  He later studied in Kiev, Odessa, and Berlin.  From his earliest years, he devoted himself to Jewish communal matters.  During WWI, He was a cofounder of the society that brought assistance to Jews, known as Yekopo (Yevreyskiy komitet pomoshchi zhertvam voyny—“Jewish Relief Committee for War Victims”).  During pogroms in Ukraine in 1918, at the risk of his own life, he brought help to Jews being victimized.  From 1921 until his tragic death, he lived in Warsaw.  There he was one of the most devoted Jewish community leaders, director of the Joint Distribution Committee in Poland, and founder of a network of interest-free loan sources for Jewish retailers and craftsmen.  He was also active in secular Jewish cultural and educational institutions, such as the publishing house of “Kultur lige” (Culture league), Tsisho (Central Jewish School Organization), and YIVO.  He was a contributor to Pinkes yekopo (Records of Yekopo) in Vilna (1930), where he published a portion of his autobiography which illuminated an important chapter of Jewish life in Russia and Poland through 1921.  He authored a pamphlet, entitled Di gmiles khesed kase, a folks-institutsye (The interest-free loan treasury, a folk institution) (Warsaw, 1932), 16 pp.  He was one of the main contributors to the journal Folkshilf (Popular assistance) (Warsaw, 1931-1939).  He edited the monthly Dos virtshaftlekhe lebn (The economic life) (Warsaw, 1934-1935), in which he also published articles on various Jewish matters.  In September 1939, when the German seized Poland, he escaped to Vilna, and there he ran an aid campaign for Jewish refugees.  He traveled to Stockholm to establish ties to the United States.  While at sea, his ship was detained by the Nazis, and he together with M. Ozhek were sent to a German concentration camp.  In April 1940 together with a transport of captured Jewish soldiers, he came to Warsaw and self-sacrificingly he carried on with his work.  He was among the organizers of the Warsaw national committee, of the Jewish fighting organization, and one of those who believed that as early as possible they had to begin a stone-throwing movement against the Germans.  He was murdered by the Nazis on the stairs of his apartment, during the first uprising action at the start of the second expulsion from the Warsaw Ghetto. 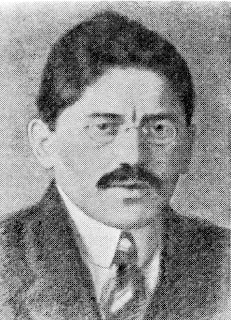