ISER GINZBURG (October 28, 1872-October 12, 1947)
He was born in Develtov (Delvuta), Kovno region, Lithuania, into a poor family.  He studied in yeshivas in Vilkomir (Ukmergė) and Vilna.  At age thirteen he was living in Vilna, and he began reading literature of the Jewish Enlightenment, before becoming a teacher of Hebrew and Jewish history for a group of young lads who dubbed themselves “Ohave yerushalaim” (Lovers of Jerusalem) and left the yeshiva.  At age sixteen he became acquainted with a group of Jewish socialists and proceeded to acquire a general education.  His first teachers were: Mendl Rozenboym, Arkadi Kremer, and Yudin-Ayzenshtadt.  He initially prepared to travel to Breslau, Germany, to study for the rabbinate, but he repented and in 1893 departed for the United States.  He studied medicine at Cornell University and became a doctor in 1900.
While still young, he began writing for Hamelits (The advocate), but after coming to the United States he became a professional journalist and writer.  He initially contributed to the weekly newspaper Der folks-advokat (The people’s advocate), in which he published stories as well.  Later, he wrote for the daily Herald (Herald).  For a short time he edited the weekly Yunyon-tsaytung (Union newspaper) and the monthly journal Der nayer gayst (The new spirit); he also contributed to: Di fraye gezelshaft (The free society), Fraye arbeter shtime (Free voice of labor), Tsukunft (Future), and Forverts (Forward).  He remained a regular contributor to the Forverts until the last days of his life.  Aside from articles and feature pieces on actual political and community matters, he wrote a great deal on Jewish history and ancient Hebrew literature.  He carried on a sharp polemic with Dr. Chaim Zhitlovsky on the issue of Judaism and Christianity.  This was published in Dos naye lebn (The new life) in 1910 under the title “Tsu der tseylem-frage” (On the issue of the cross).  He also wrote pieces for the Hebrew-language newspapers: Hatoren (The mast), Hamiklat (The refuge), and Hadoar (The mail).
Among his books: Bleter oys der geshikhte fun obergloyben (Pages on the history of superstition) (London, 1906), 50 pp.; Der idisher got adonay amol un haynt (The Jewish God, Adonay, then and now) (London, 1906); Di filozofye fun geshikhte fun henri thomas bokl (The philosophy of history of Henry Thomas Buckle) (New York, 1906), 32 pp.; Vos iz an apikoyres? (What is a heretic?) (London); Der talmud, zayn entshtehung un entviklung (The Talmud, its emergence and development) (Warsaw, 1910), 107 pp., enlarged and improved edition (Warsaw, 1931), 141 pp. (also published in Spanish); Di entshtehung fun kristenthum (The emergence of Christianity) (New York, 1917), 243 pp., (Warsaw, 1929), 216 pp.; Yidishe denker un poetn in mitlalter (Jewish thinkers and poets in the Middle Ages), 2 vols. (New York, 1918-1919), second edition (New York and Warsaw, 1928-1929), vol. 1, 299 pp., vol. 2, 264 pp.; Der rambam (rabi moyshe ben maymon) zayn leben, zayn shafen un zayn virken (The Rambam [R. Moshe ben Maimon], his life, his works, and his impact) (New York, 1935), 62 pp.  Among his pseudonyms: Okets, Der Shtekhiger, Dr. A. Zeldes. 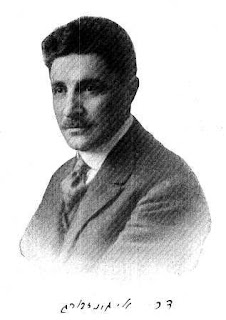