LEYB GLANTS (LEIB GLANTZ) (June 13, 1898-January 28, 1964)
He was born in Kiev, Ukraine.  He studied in religious primary school, yeshivas, secular high school, and at Kiev University, from which he was expelled for Zionist socialist activities.  He graduated from the Kiev Music Conservatory.  He lived from 1920 to 1927 in Kishinev where he was active in the Zionist movement.  From 1927 he was a cantor in New York and Los Angeles.  In 1954 he settled in the state of Israel.  He began writing articles in Hebrew for the Youth Zionist organ Mishmeret ḥadasha (New guard) in Kiev in 1920.  He was a contributor to the daily newspapers Der id (The Jew) and Unzer tsayt (Our time) in Kishinev over the years 1921 to 1927.  During those very years, he edited in Kishinev the weekly Erd un arbet (Land and labor), contributed as well to Haolam (The world) in London (1922), later placed pieces in Haynt (Today) and Moment (Moment) in Warsaw, as well as in: Tog (Day), Idisher kemfer (Jewish fighter), and Farn folk (For the people) in New York; Idishe shtime (Jewish voice) in Los Angeles; Der veg (The way) in Mexico; Keneder odler in Montreal; Dorem-afrike (South Africa) in Johannesburg; Idishe tsaytung (Jewish newspaper) in Buenos Aires; and Davar (Word) in Tel Aviv.  He wrote (also using the pseudonym “Yeleg hatsair” [Yehuda Leib Gordin the younger]) on general political as well as Jewish community topics.  He was also a music critic and theater reviewer.  He composed music to prayers, as well as to poems by Hebrew and Yiddish poets.  His compositions were published by Bloch Publishing Co. in New York and Sifriya muzikalit (Musical library) in Tel Aviv, among others.  He was always involved in community affairs, primarily in the Zionist socialist movement, initially in Bessarabia and later in the United States.  He was also a delegate to Zionist congresses.  He was living until his death in Tel Aviv. 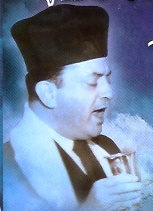