KHAYIM-YONE GURLAND (1843-March 14, 1890)
He was born in Kletsk (Klieck), Byelorussia.  He graduated from the Vilna rabbinical school.  Over the years 1873-1883, he studied Semitic languages at St. Petersburg University.  He was the inspector of the rabbinical school in Zhitomir, and at times, due to medical reasons, in Germany.  In 1883 he settled in Odessa where he founded a high school and was ordained by the rabbinate.  He published articles om Jewish themes in: Hamagid (The preacher), Hamelits (The advocate), Hakarmel (The Carmel), Hatsfira (The siren), Haboker (This morning), Or hashaḥar (The light of dawn), Yeshurun (Jerusalem), and Halevanon (The Lebanon).  Over the course of years, he published (1867, 1877-1883) Hebrew-Russian calendars (almanacs) (with text mainly in Russian), some of which were regarded as the first efforts at calendar publications with material concerning Jewish community affairs—such as Luaḥ gadol besfat ivri (Great calendar in the Hebrew language), Luaḥ ivri (Hebrew calendar), Luaḥ Israel (Jewish calendar), and Luaḥ yisraeli (Jewish calendar), among others.  His calendars excelled in that, aside from the calendrical portion, they provided: (a) statistical information concerning the Jewish people at that time; (b) information concerning the Jewish periodical literature over the years 1876-1880; (c) materials concerning the Jewish communities in Russia and beyond (adapted to the bibliographic handbook Asaf hamazkir by Khayim-Dovid Lipe); and (d) statistics on Jews in Vilna Province.  In addition to his calendars, he published: a book about the influence of Islamic philosophy on the works of the Rambam, entitled Ginze yisrael be-st.-piturburg (Records of Israel in St. Petersburg) (St. Petersburg, 1868); a study of Abraham Firkovich’s Karaite manuscripts (1866); and Penine hamelitsot (Pearls of [Jewish] phraseology) (1867).  He edited and published (initially the material appeared in Otsar hasifrut [Treasury of literature])—Lekorot hagezerot al yisrael—concerning the massacres of 408 and 409, in five volumes (vol. 1: Cracow, 1890), and in them he published (in vol. 2) Tsuk haitim (Difficult days) by Meir ben Shmuel of Shebreshin and under the same title, Tsuk haitim, by Yehoshua ben David of Lvov (Lemberg), as well as Mizmor shir yom hashabat (A song for the Sabbath day) by the same Meir ben Shmuel—thirty Aramaic songs with Yiddish translation by Gimpelin Segal from Vienna (the translation dates from 1674), and it was published for the first time in Amsterdam with an afterword by Yankev Rayfman and appeared in Sefer tit hayaven (Place of suffering).  He also used as a pseudonym his initials “Hyug.”  He was also the author of a booklet entitled in Yiddish, entitled Di naye yudishe gimnazye (The new Jewish high school) (Zhitomir, 1894).  He died in Odessa. 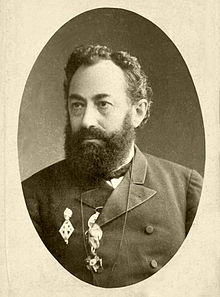