YANKEV GLATSHTEYN (JAKOB GLATSTEIN) (1895-1942)
Born in Lublin, he hailed from a prominent musical and literary family: son of the Lublin city cantor, R. Moyshele Glatshteyn; cousin of the poet Yankev Glatshteyn; and younger brother of the musician and choir director Yoysef-Shloyme Glatshteyn.  He received a traditional Jewish education.  In his early youth, he was a choir boy at his father’s synagogue.  During the years of WWI, he left for Warsaw.  There, with the help of his brother, he perfected his musical talents.  He worked as a singing teacher in the Yehudiya secondary school in Watrsaw.  He rapidly became a prolific composer of music for Yiddish workers’ and children’s songs.  In the early 1920s he won a prize from Tsisho (Central Jewish School Organization) for writing music for Yiddish songs.  He worked as a teacher of singing in the Warsaw Tsisho schools, director of school children’s choruses, and he directed the choruses of the Bundist youth organization “Tsukunft” (Future).  For many years, he labored indefatigably to inculcate in Jewish school children and youths the culture of song, the aesthetic sensibility for beautiful sound and melody, and he was therefore very popular among Warsaw Jewish working youth.  He wrote treatises on music and song for Grininke beymelekh (Little green trees) in Vilna, Folkstsaytung (People’s newspaper) in Warsaw, and other youth, school, and music publications.  He acquired among laboring circles and then compiled a collection of popular labor and folksongs, with notation for singing and playing: Di fraye muze (The liberated muse) (Warsaw: Lire, 1918), 101 pp.  His performances with youth choruses throw light on the endeavors of Warsaw workers and cultural and school organizations.
He stayed in the Warsaw Ghetto during WWII.  He experienced extremely difficult times.  He lived in dire straits.  His wife died in the ghetto of typhus, and he had to take care of his small child all by himself.  In 1940 he wrote a letter to his cousins Yankev and Mortkhe Glatshteyn in New York, saying that if they were able to rescue him, they should at least move to rescue his highly talented son who had already made a name for himself in the musical world, and a great musical future had been predicted for him as a piano virtuoso.  He carried on his musical activities in the ghetto in the realm of chorus singing and mass declamation and arranged concerts in an auditorium of the Warsaw Judaic Library.  He composed a melody for Yitskhok Katsenelson’s poem “Aroys in gezangen a yid af der gas” (Out goes a Jew into the street to sing), published in Dror-tsaytung (Freedom newspaper) in 1940.  He was murdered together with his son at Treblinka. 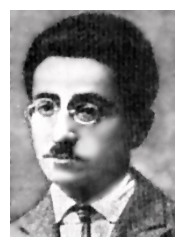