SHLOYME GILBERT (February 10, 1885-August 1942)
He was born in Radzymin, near Warsaw, Poland.  When still a young lad, his parents moved to Warsaw, but he remained in Radzymin with his grandfather, R. Yoysef Gimpl, who was at one time a Nikolaevsky soldier [one who had served under Tsar Nikolai I, usually for twenty-five years] who had for many years lived in Kavkaz, and in general was a Jew with a distinctive life story.  Shloyme thus stayed behind to study at the Radzymin rabbi’s synagogue study hall, and later even devoted himself to mysticism and spiritualism.  He was also musical—an attribute he inherited from his father and his grandfather.  At age sixteen or seventeen, he moved to Warsaw.  He began writing in 1905, but none of these works were published.  In 1907 for the first time, he published in the collection Nay-tsayt (New times) two moody pieces, “Tsu der zun” (To the sun) and “In shtot” (In the city), and in the collection Der yunger gayst (The young spirit) (Warsaw, 1908) a poetic sketch entitled “Fun land shvindzukht” (From the land of tuberculosis).  These first pieces all drew the attention of the critics (Shmuel Niger, in Der nayer veg [The new way] 8-9, Vilna, 1907), and from that point forward he published sketches and short stories in: Roman-tsaytung (Fiction newspaper), Haynt (Today), Unzer lebn (Our life), Der fraynd (The friend), Literarishe bleter (Literary leaves), Naye folkstsaytung (New people’s newspaper), all in Warsaw; and Tsukunft (Future) and Forverts (Forward) in New York.  His first collection of stories, Noveln (Stories), appeared in Warsaw in 1922, published by the literary fund of the Warsaw association of authors and journalists, 142 pp.  Subsequent books included: Meshiekhs trit, dramatishe poeme in dray aktn (Messiah’s steps, a dramatic poem in three acts) (Warsaw, 1924), 42 pp., translated into Hebrew by A. L. Yakubovitsh in Hatekufa (The epoch) 7; Der keler (The basement), a comedy in three acts (Warsaw, 1927), initially published in Tsukunft in New York (June 1925); Dertseylungen un drames (Stories and dramas), “with a biographical-critical introduction by Sh. Niger and with remembrances by [the writer’s brother] Pinkhes Gilbert and Meylekh Grafshteyn” (Toronto, 1954), 336 pp.  He was, according to M. Ravitsh, the most interesting personality around Warsaw’s [Jewish Literary Association at] “13 Tłomackie Street.”  During the Hitler era, he was confined to the Warsaw Ghetto, where he suffered from hunger and want; he continued to write and was active in the Jewish cultural organization, “IKOR” (Yidishe kolonizatsye organizatsye in rusland).  In August 1942 he was deported to Treblinka and murdered there.
People called him “Der zaydener”—the silken one.  “Shloyme Gilbert belonged to the very small number of poets,” wrote Shmuel Niger, “who did not lose their faith.  He sought God in God’s works, but also in man’s artistic works.  He was both a man of nature and a man of art….  What made him different, his originality can be felt in his personal demeanor and in his writings.” 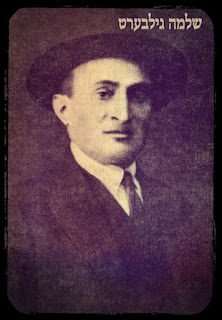