YEKUTIEL GINTSBURG (JEKUTHIEL GINSBURG) (August 15, 1889-October 7, 1957)
He was the older brother of Shimen and Peysekh Ginzburg, born in Lipnik, Volhynia.  He emigrated to the United States in 1912, where he was a Hebrew teacher and leader in “Histadrut ivrit” (Hebrew organization).  He studied at Cooper Union and Columbia University in New York, graduating from the latter in 1916.  In 1926 he became an assistant professor in the department of mathematics at Teachers’ College at Columbia University, a post he held until 1939.  In 1928 he became assistant professor of mathematics at Rabbi Isaac Elchanan Theological Seminary in New York.  In 1936 he became professor and in 1940 the head of the department of mathematics.  In 1945 he founded the Institute of Mathematics at Yeshiva University and served as its director.  In 1932 he founded and became the chief editor of the mathematics quarterly Scripta mathematika (Mathematical writings) and of the volumes Piktshoryel matematiks (Pictorial mathematics).  He was considered one of the more important American mathematicians.  Together with Professor Smith, he was the author of A History of Mathematics before 1900 (New York, 1936), 209 pp.; and of Number and Numerals: A Story Book for Young and Old (New York, 1938), 52 pp.  He was a contributor to Hamiklat (The refuge) and Hadoar (The mail), in which he also published features under the pen name “L. Gug.”  He often wrote for English-language periodicals essays on the history of Jewish contributions to and accomplishments in mathematics.  He was a contributor to the Encyclopaedia Britannica.  In 1920 he oversaw a scholarly column in Tsayt (Times) in New York.  In 1931 he published articles in Tog (Day) in New York.  He wrote a foreword to Reuven Ogushevitsh’s Emune un apikorses (Faith and heresy).  He died in New York. 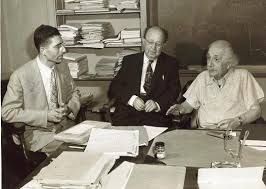