PINKHES-MIKHL GINGOLD (April 12, 1892-September 20, 1953)
He was born in a village near Horodets, Kobryn region, Polesye.  He studied in religious elementary school, later in the yeshiva in Brest, Lithuania.  There he stood with the Zionist movement and set out to acquire a general education.  In 1913 he emigrated to the United States.  In New York, he worked as a wallpaper hanger, while at the same time continuing his studies.  In 1928 he received a teacher’s diploma from Teachers College at Columbia University.  In 1929 he acquired a master’s degree.  During the years of WWI, he was in the Jewish Legion in Israel.  In 1919 he returned to New York and became secretary of the Jewish teachers’ seminary and folk institute.  Thanks to his efforts, the seminary received in 1928 a college “charter” (giving it the accredited status of a specialized college).  His writing activity concentrated mainly on pedagogical themes and issues in Jewish school curriculum.  In the main he published articles in trade periodicals.  Some of them were used in mimeographed form on the American continent as learning materials for Jewish schools.  In the Pinkhes gingold bukh (Pinkhes Gingold volume) (New York, 1955), which was published after his death, his most important articles were compiled, and by topic they were divided under the rubrics: “Dertsiung” (Education), “Yomim-toyvim” (High Holy Days), “Kultur-bavegung” (Cultural movement), and “Der yidisher legyon” (The Jewish Legion).  There were also in the book notices and a section entitled “Tsu zayn perzenlekhkeyt” (On his personality), with appreciations of him from a number of writers and by his close associates.  Over the years, he edited the journal Kindervelt (Children’s world), and he served on the editorial board of Bleter far yidisher dertsiung (Pages on Jewish education).  He was one of the leading members of the Poale-Tsiyon Party in America and a member of its central committee.  He was also active in the Yidisher natsyonaler arbeter-farband (Jewish National Workers Alliance) and the central school committee; and he was an executive member of the American Jewish Congress.  As one of the initiators of the Jewish Cultural Congress, in 1947 he went on a campaign tour (together with Yankev Pat) through the Jewish communities in South America.  Later, he was elected to the central council of the Cultural Congress.  He was also an executive member of “Histadrut ivrit” (Hebrew organization) and of “Brit Ivrit Olamit” (“World Association for Hebrew Language and Culture”).  He died in New York. 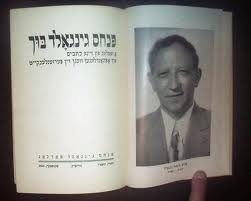