MOYSHE-SHMUEL GLAZNER (1856-1924)
He was born in Kloyzenburg (Cluj-Napoca, Klausenburg), Transylvania, the son of the local rabbi, R. Avrom Glazner, and grandson on his mother’s side of R. Moyshe Sofer (the Chatam Sofer).  He served as the rabbi of Kloyzenburg, was the author of Hebrew texts, and he was a leader and member of Mizrachi, in whose interest he often traveled through Europe.  In 1922 he settled in Israel.  He published in a highly Germanized Yiddish: Der tsienizmus un zayn gebenershaynungen im likhte der religion (Zionism and its images in light of religion) (Kloyzenburg, 1920), 32 pp.  He died in Jerusalem. 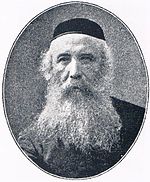