MOYSHE GILDENMAN (1898-August 10, 1957)
He was known by the pseudonym “Dyadya Misha” (Uncle Misha).  He was born in Korets, Volhynia region, Poland, into a well-to-do family.  He studied in religious elementary school, secular high school, and polytechnicum.  Until WWII he was employed as a construction engineer and the owner of concrete factory.  When the Germans occupied Korets, he was confined to the ghetto, and after the massacre of Korets Jews, he anticipated the coming liquidation of the remnant of surviving Jews.  Together with his sixteen-year-old son Simkhe, he escaped from the ghetto into the woods near the Sluch River.  There he organized a Jewish partisan group which boldly ambushed Germans, and he became its director and commander.  When the Germans surrounded his group, many partisans broke through and reached the Zhitomir forest, where they reorganized.  Their numbers reached 1400, and the group, known as “Uncle Misha,” went on with the Red Army to victory over the Germans.  He returned in 1946 to Poland and was active in the party of the progressive Zionists.  He later lived for several years in Paris, and from there he moved to the state of Israel in 1952, where he worked for Yad Vashem.  He began writing stories and reportage pieces about Jewish partisan life for Dos naye lebn (The new life) in Lodz in 1946, and from that time forward he contributed to: Iḥud (Unity) in Lodz (1946-1947; Al hamishmar (On guard) in Lodz (1947); Mosty (Bridges) in Lodz (1947-1948); and Naye prese (New press) and Der veg (The way) in Paris.  He was a regular contributor to Di letste nayes (Latest news) in Israel and Yidishe tsaytung (Jewish newspaper) in Buenos Aires, where he published short stories.  He published a major piece of writing, entitled Libe un kamf fun a yidisher partizanerin (Love and struggle of a Jewish woman partisan)[1] which told of the part played by Jewish women in the fight against the Germans.  Among his books: Afn veg tsum zig, tipn fun yidishe partizaner (On the road to victory, types of Jewish partisans) (Paris, 1949), 48 pp.; Motele der yunger partisan (Motele, the young partisan) (Paris, 1950), 197 pp.; Khurbn korets (The Holocaust in Korets) (Paris, 1950), 78 pp.; and Yidishe tekhter (Jewish daughters) (Paris, 1950), 208 pp.  He gave expression to the heroism, nobility, and self-sacrifice of the Jewish partisans who saved hundreds of Jewish lives and the sanctification of God’s name which was their life’s goal.  A number of his stories were translated into Hebrew, Polish, and French.  He published under the name “Dyadya Misha” as well.  He died in Ness Ziona, Israel. 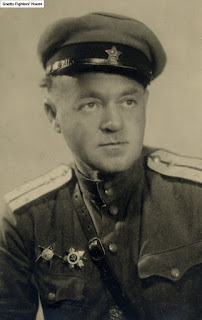 
[1] He appears to have written several works, though none with this title, on female Jewish partisans, which appeared just before this biography would have gone to press.
Posted by Joshua Fogel at 14:12