AYZIK (JAMES) GLOBUS (1873-October 3, 1950)
He was born in Vitebsk, Byelorussia, into a well-to-do family.  He studied at a secular high school.  While young he was drawn to political activism.  At age seventeen he had to leave Russia.  He moved to the United States and worked in a pharmacy in New York.  He studied to become a pharmacist and had his own drugstore in Brooklyn.  He later studied dentistry and became a dentist.  He was close to Labor Zionism as well as to anarchism.  He wrote a great deal about Marxism, Marx and Engels, and various other philosophers in Tog (Day); in the journal Mir (Us), edited by Yankev Stodolski, Meinke Kats, and William Abrams; Problems (in English, edited by Aba Gordin); and in Nyu-yorker vokhnblat (New York weekly newspaper), to which he contributed until the end of his life.  Among his books: Dr. khayim zhitlovski un ab. kahan (Dr. Chaim Zhitlovsky and Abraham Cahan) (New York, 1944), 24 pp., produced by hectography.  He died in Brooklyn. 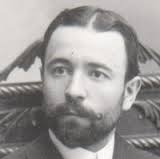