YISROEL-MEYER BRENDER (January 9, 1888-December 1, 1927)
He was born in Stanislavov, eastern Galicia, into a merchant household, received a Jewish education, graduated from high school—and later from the law faculty of Cracow University—became a doctor of law, and was a lawyer in various cities in Galicia and also in Vienna.  He published sketches and poems in various Polish Jewish and Yiddish serials in Galicia.  In 1915 he took over editorial duties for Vokhnblat (Weekly newspaper) in Copenhagen, served as secretary there for the Auxiliary Committee for Jewish War and Pogrom Victims, general secretary for the Scandinavian Jewish Central Auxiliary Committee, and editor of Folks-hilf (Popular assistance).  In 1927 he founded Skandinavyen yidishe korespondents (Scandinavian Jewish correspondence); and in 1924 he published in Berlin the weekly Yidishe ilustrirte tsaytung (Jewish illustrated newspaper).  He died in Berlin.  Among his books: In shturem fun lebn (In the storm of life), poems (Cracow, 1911), 80 pp.; Zumer-nekht (Summer nights), stories (Cracow, 1912), 92 pp. 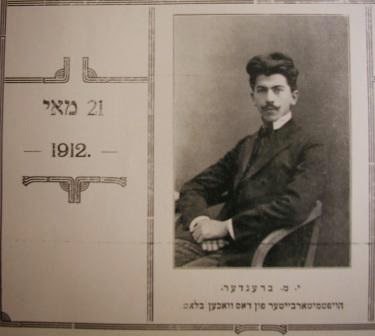