MOSHE BRIND (September 21, 1894-September 1975)
He was born in Letychiv, Podolia region.  He spent his early childhood in Palestine.  He studied in religious elementary school, yeshiva, the Betsalel School, and a teachers’ seminary.  In 1913 he debuted with Hebrew poems.  During the years of WWI, he was back in Russia, where he was mobilized.  After the war he published poetry and essays in various Hebrew publications.  In 1923 he emigrated to the United States.  He wrote for Morgn-zhurnal (Morning journal), Dos yidishe folk (The Jewish people), Tog (Day), and Epokhe (Epoch), among others.  In book form, he brought out four collections of poems in Hebrew.  He translated into Hebrew poetry from a number of Yiddish poets.  He died in the Bronx, New York. 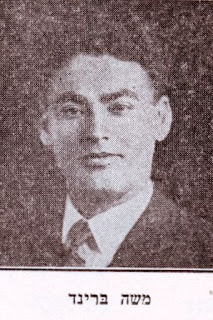