He was born in Trisk (Turiysk), Poland.  He studied in religious elementary schools and in a yeshiva, later graduating from the Jewish teachers’ seminary run by Tsisho (Central Jewish School Organization).  From 1929 he was living in Częstochowa, where he worked until 1933 as a teacher of Yiddish at the Peretz School and lectured on Yiddish literature at the local branch of the Kultur-lige (Culture league).  From 1934 until the Nazi invasion, he was a contributor to Taz [the Jewish health organization] and a leader of the children’s colonies.  In the Częstochowa ghetto, he was one of the most active underground anti-Nazi fighters.  On January 15, 1945, he was liberated from the Hasag concentration camp and among the first to start building Jewish life in Częstochowa following the Holocaust.  He served as chair of the Jewish committee and one of the founders of the Jewish Cultural Association in Poland.  He began publishing in the publications of Tsisho, such as Shulvezn (School system), among others, contributed to illegal Yiddish and Polish printing, and published articles in the revived Folkstsaytung (People’s newspaper) in Warsaw, as well as in: Bleter far geshikhte (Pages for history), Dos naye lebn (The new life), and Yidishe shriftn (Jewish writings)—in Warsaw; Tshenstokhover yidn (Częstochowa Jews) (New York, 1947); and he was regular contributor to Lebns-fragn (Life issues) in Tel Aviv.  Among his books: Vidershtand un umkum in tshenstokhover geto (Uprising and death in the Częstochowa ghetto) (Warsaw: Jewish Historical Institute of Poland, 1951), 176 pp.  He translated from Russian Der groyser rusisher shrayber n. v. gogol (The great Russian writer, N. V. Gogol [original: Velikii russkii pisatel’ N. V. Gogol’]) by N. L. Stepanov (Warsaw, 1952); and from Polish Der alter doctor (The old doctor [original: Stary Doktor]) by Ida Merżan (Warsaw, 1968).  He moved to Israel in 1958 and lived in Bet-Yam. 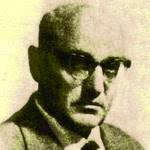