SHOLEM BRIN (b. April 18, 1889)
He was born in Jaffa, Israel.  At age two, he was brought to Ponevezh (Panevezys), Lithuania.  He studied in religious primary school, synagogue study hall, and as an external student.  Around 1905 he was a teacher and active in the Bund.  In 1907 he was a prompter and actor in a Yiddish theater troupe.  From that time forward, he was tied to the Yiddish theater in Poland, Soviet Russia, Austria, Turkey, and Romania.  He wrote a number of comedies that were staged in Yiddish theaters in Europe: Yankl sholtik (Yankl the scoundrel), Di bombe (The bomb), A minut un gut (A minute and good), Soreke di varsheverin (Little Sarah, the girl from Warsaw), Gekhapt dem tatn (Captured father), A meydl mit a fargangenheyt (A gal with a past), and Zayn gelibte (His beloved).  He translated for the Yiddish theater: Harbst-fidlen (Autumn violins) [by Ilya Surguchev, Osennie skripki], Vera mirtseva (Vera Mirtseva [by Lev Urvantsov], Roman [?], Der prayz fun lebn (The price of life) [?], Madam san zhen (Madame Sans Gêne, [by Victorien Sardou], and Der fayer-ring in blut (The ring of fire and blood) [?].  He also published articles about theater in the Romanian Yiddish press.  His subsequent career is unknown. 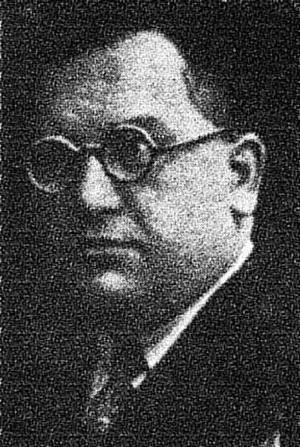