R. NAKHMEN BRASLAVER (R. NACHMAN OF BRATSLOV, BRASLAV) (Shabbat, Nisan 1 [April 4], 1772-Tishrei 18 [October 16], 1810)
R. Nakhmen, son of Simkhe (Simcha), was born in Medzhybizh, Podolia, southern Russia.  His father was from an exalted rabbinic family and served as the cantor in the synagogue of the Baal Shem Tov (Besht).  His mother Feyge was a granddaughter of the Besht and a sister of two celebrated holy men: R. Brukhl of Medzhybizh and R. Froym of Sudilkov.  As a child R. Nakhmen did not excel in learning.  It was even frequently difficult for him to take in what he was studying, but he had a strong character and a rich imagination.  According to legend, he already at age six fasted and endured self-mortification.  He married at age twelve (according to some sources, it was fourteen).  His lived with his father-in-law in a village, absorbing himself deeply in Talmud and Kabbalah.  He profoundly loved nature and had a good knowledge of it.  He would seclude himself in a field, on a mountain, or in a dense forest and there carry on in seclusion.  After the death of his father-in-law, he settled in Medvedevka, and there assembled around him Hassidim as he became a rebbe.  In 1798 (during an unsettled time in the midst of the Napoleonic Wars), ignoring all hindrances, he left his wife and children and made a voyage to the Land of Israel.  After spending just short of a year in Tiberias, he returned and settled in Zlatopol, in the Kiev region.  Because he looked with contempt on other rebbes, it led to a quarrel especially with the neighboring holy man, “the Shpoler zeyde” (the old man of Shpola), and he was compelled to leave Zlatopol.  In 1802 he settled in Braslav (Bratslav).
R. Nakhmen always held that it is better to pour out one’s heart and offer prayer in language that people understand well.  Crying by himself, he used to pray in older Yiddish and often improvise prayers in Yiddish.  If this sort of prayer succeeded, he would put it into writing, or have it transcribed, so that he would able to repeat it and others intone it as well.  A person with an extraordinary imagination and an artistic nature—which formed his character, according to Shmuel Niger—striving to dress up his teachings in garb and storylines, in 1806 he began to recount his intimate stories in Yiddish.  His closest student, R. Nosn Shternharts (Nathan Sternhartz), or—as people called him—R. Nosn of Nemirov, who served R. Nakhmen as a kind of private secretary and wrote down everything that came out of his rabbinical mouth—transcribed his master’s tales with great devotion, word for word, in Hebrew (according to Shmuel Niger, he wrote them down in Yiddish and then translated them into a more starkly Jewish Hebrew-Aramaic).  If he could find no equivalent for a word in Hebrew-Aramaic, he left R. Nakhmen’s expression in Yiddish.  These stories were the richest fruit of R. Nakhmen’s creative fantasies.  Like every artist, he had his own difficulties in creating: “I have many naked thoughts,” he complained, “which are hard for me to dress up.”  His wish was that his stories be published in Yiddish and in Hebrew.  In 1808 he became ill with tuberculosis and moved to Lemberg to convalesce under the care of local doctors.  There he prepared for publication Likutey moharan (Collected teachings of our teacher, [R. Nachman]), a collection of his Hassidic thoughts, transcribed by R. Nosn of Nemirov.
His Sipure-maasiyot (Tales [of R. Nakhmen])—with Hebrew on top and Yiddish below—which had already spread widely in manuscript, appeared for the first time in 1815 and was reprinted subsequently many times in Lemberg, Warsaw, Lublin, Jerusalem, and elsewhere.  Aside from the longer stories, some more realistic and some more fantastic-legendary, some twenty shorter stories and fables were later brought together.  They were not to put someone to sleep, he stated, but to wake one up.  In many of them, there is an imaginary world, a treasury of images, ideas, and intentions, built upon folktales.  They disguise within them the last flashes of the old religious-storytelling creations as well as the beginning of the new Yiddish art of the story.  Y. L. Peretz, Hillel Zeitlin, Y. Y. Trunk, Yankev Glatshteyn, and others adopted motifs and entire episodes from R. Nakhmen’s Tales.  Jonah Spivak dramatized the richest of them, although he did not complete it: “Mayse mit zibn betlers” (Tale with seven beggars).
From Lemberg, R. Nakhmen was invited to Uman and there he died.  Braslaver Hassidim would come every year on the anniversary of his death to his tomb. 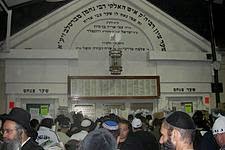 Synagogue at the tomb of R. Nakhmen in Uman, Ukraine