A critic and literary researcher, he was born in Bel’sk-Padliaski, Byelorussia. At age 15-16 (1912-1913), he and a group of friends brought out in their local school a handwritten journal entitled Bafrayung (Liberation). In 1919 he volunteered for service in the Red Army. After demobilization in 1921, he worked on the editorial board of the Russian-language newspaper Orlovskaya Pravda (Orlov truth), and he studied at Moscow State University (1922-1925) and later at the “Communist University” [of National Minorities of the West] (1926-1930). For him these were years, as he would later write in an autobiographical article, “Vegn zikh un azoyne vi ikh” (About myself and those like me), when “in the workers’ faculties, in party school, in the Communist University we were biting the rock of scholarship with young dogged teeth.” Studying the history of art criticism, he became interested in the history of the “Jewish Pisarev”— Avrom-Uri Kovner (1842-1909), publicist of the Jewish Enlightenment epoch, one of the founders of literary criticism and modern Hebrew literature. In Kovner’s biography, Bronshteyn discovered the typical features of the “first Jewish Raznochinets,” and what was especially important (this was also stressed by Moyshe Notovitsh in his article about Bronshteyn)—Bronshteyn found in his early research work on Kovner a fighter against ideology in literature. His dissertation on Kovner was published in 1930. At the same time, he was devoting his attention as well to research on modern Soviet Jewish literature. Izi Kharik, Zelik Akselrod, Arn Kushnirov, Itsik Fefer, Dovid Bergelson, and Hirsh Orland—each of these prominent writers gained in his articles a profound appreciation. His literary critical articles, written over the years 1925-1930, were collected in his book Atake (Attack). Not always did his criteria coincide with the evaluations of other authoritative literary critics, and fierce debates would erupt. He paid a great deal of attention to questions of style in post-October Yiddish literature and published on this topic in his “Der stiln-kamf inem peryod fun militarishn komunizm” (The struggle over style during the period of military Communism) and “Af di vegn tsu der proletarisher literatur (etapn)” (On the pathways to proletarian literature, stages). Bronshteyn’s later biographies are noted for his analysis of the struggle over style in Soviet Yiddish literature. Over the years 1917-1921, he strove to get his hands on the mass of material from the Yiddish newspapers, journals, and one-off publications of that era. Studying “the first flash of rebellions in style” and snatching up the “least revolutionary demonstration of style in the transformation of genres, motifs, [and] stylistics,” he sought to assert the thread that tied Yiddish literature in this period of military Communism, on one side, to older Yiddish literature of the 1880s and 1890s (so-called “proletarian”), on the other side. His ideas in this realm are interesting, how traditional soft landscape was woven with modern lyrical landscape which played such a role in Kharik’s and Fefer’s writing concerning the Russian civil war. When he moved from Moscow to Minsk, he became the head of the department of Yiddish literature and language in a pedagogical institute, later becoming a leading figure in the Jewish section of the Byelorussian Academy of Sciences and a member of the central executive committee of the Byelorussian government. He was active as a critic not only in Yiddish literature. He devoted a series of interesting articles to Maxim Gorky, Vladimir Mayakovsky, Dmitry Furmanov, and Ilya Ehrenburg. Over the years 1934-1937, he worked a great deal on Byelorussian criticism. He was arrested on December 11, 1937, as an “enemy of the people,” together with Moyshe Kulbak and Izi Kharik, and he was shot at the end of October. 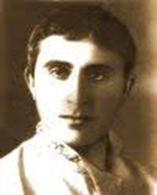