He was prose author and playwright, born in Telekhan (Tsyelyakhany), Minsk region (later Polesia), Byelorussia.  His father, Yisroel-Dovid, was religious man, engaged in scholarship, and for a time a tenant innkeeper in the village of Vyado.  Godiner received a traditional education, studying Jewish subjects with his father, and later under the influence of illegal socialist literature, he was captivated by the revolutionary movement and was one of the founders of the youth movement dubbed the Kleyner Bund (Little Bund).  In 1908, he and his parents moved to Warsaw, where he became an apprentice in a locksmith’s workshop.  At age seventeen he began to work in a metal factory.  At the same time, he devoted himself to acquiring an education on his own.  He read great quantities of the Russian, Polish, and German literature.  In Warsaw he made his first attempts at composing poetry and stories, and he showed his writings to Y. L. Peretz who encouraged him to write more.  At the end of 1912, he was drafted into the Tsarist army, served in the Caucasus, participated in the first fighting of WWI, and in 1914 he was wounded while traversing the Carpathian Mountains on the battle front.  In early 1918 he was captured by the Austrians, but he was soon successful in escaping from their camp to Warsaw, and from there he returned to Russia.  He remained for a short time in the army, and when the Russian civil war started, he joined the Red Army; he later joined the Communist Party.  In 1921 he came to Moscow as a student and entered the Valery Bryusov Institute for Literature and studied there for two years.  He initially wrote poetry (never published), but from 1921 he wrote only prose.  At first, he wrote mainly about the war themes and Russian civil war, and in a distinctive symbolist style.  His first story, entitled “Reges” (Moments), was published in Emes (Truth) in Moscow in 1921, and later published work in Shtern (Star) in Minsk, Der shtrom (The stream) in Moscow, and other magazines and newspapers.  He became recognized as one of the groundwork-layers of Soviet Yiddish prose.  He also wrote dramatic works, translated many books from Russian, and compiled a literary anthology.  Gordiner went to Birobidzhan on two occasions, and there he helped found Yiddish schools and libraries, and to strengthen cultural work.  He penned a long story, “Birobidzhaner” (A man from Birobidzhan), among the first immigrants there. In 1934 he was seated on the presidium with the most prominent Yiddish authors—Perets Markish, Dovid Hofshteyn, Izi Kharik, and Yekhezkl Dobrushin—at the first conference of the councils in the Jewish Autonomous Region. He demonstrated great mastery in his chef d’oeuvre, Der mentsh mit der biks (The man with the rifle), in which he described the events in WWI and the civil war. Soon after the Nazi invasion of the Soviet Union in the June of 1941, he volunteered to fight at the front. He fought there together with the partisans.  He died there in 1942. 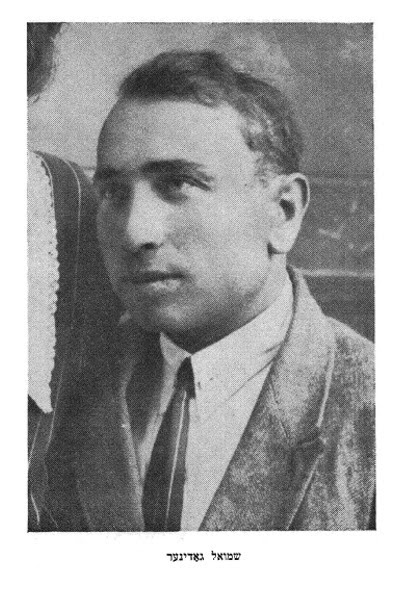