NAHUM GOLDMANN (July 10, 1894-August 29, 1982)
He was born in Vishnev (Vishnevo), near Oshmene (Oshmiany), Vilna region.  At age eight, he moved with his parents to Frankfurt-am-Main, and there he graduated from high school.  He went on to study law and philosophy at the Universities of Heidelberg, Marburg, and Berlin, and he received his doctoral degree in law from Heidelberg.  During his student years, he supported the Zionist movement, and he began to give speeches and to write in German; he also contributed pieces to Frankfurter Israelitsches Familienblatt (Frankfurt Jewish family newspaper), which his father Shlomo-Zvi edited, and in other German Jewish serial publications as well.  He spent a period of time in 1913 in Palestine, and after returning home he published Eretz Yisrael, Reisebriefe aus Palästina (The Land of Israel, letters from a trip to Palestine) (Frankfurt, 1914), 98 pp.  During the years of WWI, he was the press reporter for Jewish affairs in the German Foreign Ministry, and he traveled on missions to Poland where—ignoring the opposition of assimilationist elements in German Jewry—he intervened on behalf of Jewish national activities.  From 1919 to 1921, he and Dr. Jakob Klatzkin edited Freie Zionistische Blätter (Free Zionist newspaper).  Over the years 1922-1934, he published and co-edited Encyclopaedia Judaica (Eschkol Publishers), ten volumes in German and two in Hebrew.  At that time he began to write as well for Yiddish publications.  He was a regular correspondent from Germany for Tog (Day) in New York.  He also published articles in Tsienistishe bleter (Zionist leaves), organ of Y. Grinboym’s group “Al hamishmar” (On guard), and other serials as well.  He authored the pamphlet Undzer pozitsye in der velt fun haynt un morgn (Our position in the world of today and tomorrow) (New York, 1945), 30 pp.; and the books, In dem dor fun khurbn un geule (In the generation of catastrophe and redemption) (New York: Farband, 1964), 15, 320 pp., and Af lange vegn, eseyen un redes (On long roads, essays and speeches) (Jerusalem: Hasifriya hatsiyonit, 1968), 363 pp.


In 1927 Dr. Goldmann became a member and later chair of the Zionist Action Committee.  In 1933 he was a representative of the Jewish Agency to the Peoples’ League in Geneva.  From 1935 he was a member of the Zionist Executive.  In 1936 he founded the administrative committee of and from 1953 served as president of the World Jewish Congress.  From 1941 he was living in the United States, where he assumed one of the most important positions in the Jewish community and political life.  During the 1940s he played a central role in winning the support of the Western powers for the partition plan for Palestine.  At the twenty-fourth Zionist Congress in 1956 in Jerusalem, he was elected president of the Zionist World Organization.  He stood by three principal tasks: intensive cultural activity, intervention for Jewish cultural autonomy and emigration from Russian, and peace between Arabs and Jews.  In 1951 he received an invitation from the German Chancellor Adenauer to negotiations concerning compensation for Jewish material losses under the Hitler regime.  He led the proceedings on behalf of the Israeli government and for the Jewish organization that now constituted the “Conference for Jewish Material Claims against Germany,” in which he served as president.  He was also president of the “Committee for Jewish Claims against Austria.”  From 1954 he was chairman of the (informal) “Conference of Presidents of Jewish Organizations,” which represented the sixteen most important American Jewish corporate bodies.  He died in Bad Reichenhall, Germany. 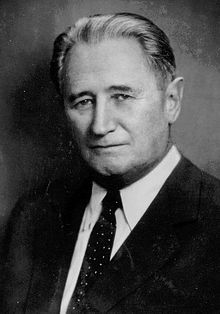