AVROM GOLDKNOPF (1870s-1920)
His family came from Poland.  He came to the United States in the 1890s.  There he wrote plays which the theatrical entrepreneurs did not wish to stage.  To “blaze his own trail,” he published a journal, Der teater shpigl un teater fraynd (The theatrical mirror and friend of the theater), “a weekly magazine for all theatrical matters, edited by Dr. A. Goldknapf (AGF).”  Nine issues appeared (in New York), between February 20 and the end of April 1920.  In this magazine he published the first and unfinished second act of his “drama of ideals and life” in four acts, “the victory of truth or the rabbi’s son, a revolutionary” and “breach of promise, or the irony of the law,” a drama in three acts, which was one of the scenes in his social drama, Der veg fun likht oder di alt-nay velt (The way of life or the old-new world).  He was by profession a masseur and a self-proclaimed “doctor.”  He died in a mental institution. 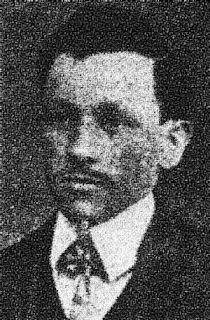