DORKE (DORKA) GOLDKORN (1922-June 17, 1947)
She was born in Warsaw, into a poor Hassidic family.  She graduated from public school and later studied in a secular high school.  From 1941 she was active in the leftwing labor movement.  She participated in the Warsaw Ghetto uprising.  She escaped with a number of fighters who went over to the Aryan side through the underground sewer system.  She was later deported to the concentration camps of Auschwitz, Ravensbrück, and Bergen-Belsen.  In 1945 she returned to Warsaw and again took up an active role in community activities.  She was murdered by Polish hooligans during the election campaign (January 1947) to the Polish Sejm.  After her death Wspomnienia uczestniczki powstania w getcie warszawskim [Memoirs of a participant in the Warsaw Ghetto uprising] appeared in print.  It had been published earlier in Folksshtime (Voice of the people) in Lodz.  It carried a foreword by B. Mark (Warsaw, 1948), 27 pp. 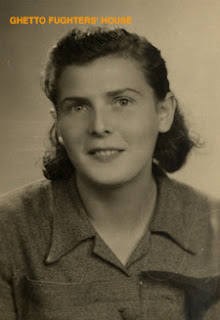