YITSKHOK BEN-TSVI (ITZHAK, YITZHAK BEN-ZVI) (November 24 or December 6, 1884-April 23, 1963)
The adopted name of Y. Shimshelevitsh, he was a representative to the first and second Knesset.  He was the president of the state of Israel from December 29 [or December 16], 1952 [until his death].  He was born in Poltava, Russia, son of Tsvi (Zvi) Shimshelevitsh, a writer and early Zionist.  He studied in religious primary school as well as “cheder metukan” (improved religious elementary school), graduated from high school in Poltava, and then studied at the Universities of Kiev and Constantinople.  He was by training a Hebrew teacher.  In 1904-1905 he paid a visit to Palestine.  He took part in founding the Poale-Tsiyon Party organizations in Ukraine, Switzerland, and Germany.  He also contributed to founding the Jewish self-defense organization in Russia (1906), and for this “transgression” he was forced to escape that same year abroad.  Ben-Tsvi’s father and his whole family was at this point placed under arrest and deported to Siberia until 1922.  Ben-Tsvi was the author of a memorandum (together with Sh. Kaplansky) proposing that Poale-Tsiyon join the Socialist International.  In 1907 he made aliya to Israel.  He was for many years a delegate to Zionist and socialist congresses as well as to Zionist and party conferences.  From 1908 he was living in Jerusalem.  He was one of the founders of Hashomer [the first Jewish self-defense organization in Palestine] and the Haganah.  From 1910 to 1914, he was in Constantinople together with David Ben-Gurion, where he was studying law.  With the eruption of WWI, he returned to Palestine and from there he was subsequently expelled (with Ben-Gurion) through Turkey to Egypt.  From 1916 he was in the United States where he was active on behalf of Poale-Tsiyon and teaching Hebrew in Jewish schools.  He was one of the founders of the Hachalutz movement and the Jewish Legion in America.  From 1918 he was serving in the Legion and in 1919 he returned to Palestine.  He was one of the founders, 1919-1920, of the Unity of Labour Party, Knesset Yisrael [the organized Jewish community in Palestine under the Mandate], Asefat Hanivḥarim (Assembly of Representatives), and Histadrut.  Over the years 1920-1921, he was a member of Herbert Samuel’s Council of State, from which he later resigned.  He was a member, 1924-1927, of the Jerusalem City Council, Vaad Haleumi (Zionist National Council), and the latter’s subsequent chair.  He was the leader as well of a number of community and Zionist institutions in the Settlement.
Ben-Tsvi was the author of historical monographs and books, and ideologue of labor-Zionism, a member and chair of higher pedagogical and scholarly institutions, and one of the most important researchers of Jewish history.  For his book Nidḥe yisrael (The exiled of Israel), he received the Bialik Prize in 1953.  He began writing in Yiddish in 1906 and published (under the Party names of Avner and Ovadiah) articles in Der proletarisher gedank (The proletarian idea) and Forverts (Forward) in Poltava.  He published in: Idishe arbeter (Jewish worker) in Cracow; Idisher kemfer (Jewish fighter), Der idisher kongres (The Jewish congress), and Varhayt (Truth) in New York; and he edited the Poale-Tsiyon journal Onfang (Beginning)—three issues appeared in 1907, published illegally in Jaffa (the place of publication was provided in the issues: Alexandria, Egypt).  In pamphlet form in Yiddish: Der palestina-arbayter-fond (The Palestinian workers fund) (New York, 1915), 24 pp. and (New York, 1916), 32 pp., and republished in Buenos Aires, 17 pp.; Erets-yisroel als land far yidisher kolonizatsye (The land of Israel as a land for Jewish colonization) (New York, 1916), 46 pp.  Among his books: Erets-yisroel in fargangenheyt un gegenvart: geografye, geshikhte, rekhtlekhe ferheltnise, bafelkerung, landvirtshaft, handl un industri (The land of Israel past and present: geography, history, legal circumstances, population, agriculture, business, and industry), with three maps of the country and eighty pictures of Israel (with D. Ben-Gurion) (New York, 1918), 477 pp.; Yerusholaim, vos iz yerusholaim farn idishn folk? (Jerusalem, what is Jerusalem for the Jewish people?) (Jerusalem, 1936); Yizker, tsum ondenken fun di gefalene vekhter un arbeyter in erets yisroel (Remembrance, to the memory of the fallen guards and workers in the land of Israel) (New York, 1916/1917), together with D. Ben-Gurion, A. Khasin, and Y. Zerubavel.  The following works by Ben-Tsvi were translated into Yiddish from Hebrew: Di arabishe bavegung in erets-yisroel (The Arab movement in Palestine) (New York, 1921), 40 pp.; Gezamlte shrift (Selected works), vol. 1 (New York, 1937), translated by L. Rubinshteyn; Poemes (Poems) (Paris-New York, 1969), 190 pp.; and chapters from his book Nidḥe yisrael, translated by M. Osherovitsh, published by Forverts.  He also published tracts and articles in Hashiloaḥ (The shiloah), Hatoren (The mast), and Haadama (The earth), among other serials.  His most important works remain Nidḥe yisrael and Erets-yisrael veyishuva biyeme hashilton haotomani (Palestine and the Jewish settlement in the days of the Ottoman authority) (Jerusalem: Mosad Bialik, 1955).  Ben-Tsvi’s wife was the well-known Israeli labor activist, Rachel Yanait. 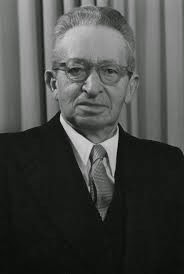 Sources: Zalmen Reyzen, Leksikon, vol. 1; D. Tidhar, Entsiklopedyah leḥalutse hayishuv uvonav (Encyclopedia of the founders and builders of Israel) (Tel Aviv, 1947), vol. 1, see index; Who’s Who in Israel (Tel Aviv, 1952); Geshikhte fun der tsienistisher arbeter-bavegung in tsofn amerike (History of the Zionist labor movement in South America) (New York, 1955), see indices to vol. 1 and vol. 2; articles in the Yiddish press on his election to the presidency of the state of Israel and in connection with his seventieth birthday.
Yekhezkil Keytelman