NOKHUM-MOYSHE BEN-KHORIM (NAHUM BEN-HORIM) (January 19, 1884-1959)
He was born in Alt-Konstantin, Volhynia.  His father was the rabbi of the city.  He attended religious primary school and yeshivas.  In 1894 he emigrated to Jerusalem.  From 1923 he was living in the United States.  He was a rabbi in Dorchester, later in New York.  He began writing in Hebrew for Haḥerut (The liberation) and Doar hayom (Today’s mail)—Palestine, 1920.  He was the author of Mapa shel roshe hadorot bizman hatalmud (Chart of the leaders of the generations at the time of the Talmud) (New York, 1948)—in his own Yiddish translation as Khokhme hatalmud (Sages of the Talmud), part one of a Talmudic encyclopedia, published by “Erets Yisroel” publishers (New York, 1928); Dos ekonomishe erets yisroel, plener un ayntslhaytn vegn agrikultur un handl, vos men ken antviklen in e’y (The economics of Palestine, plans and details concerning agriculture and business which one can develop in the land of Israel) (New York, 1924), 132 pp.; Raban yokhanen ben zakay (Rabban Yoḥanan ben Zakkai) (New York, 1928); Shabes un yontoyvim (Sabbath and holidays) (New York, 1935), 87 pp.  He also contributed to Harofe haivri (The Hebrew doctor), Hayeduhi (The Jew), and Sefer hashana histadrut bnei erets yisrael (Yearbook of Histadrut for the children of the land of Israel).  He was the author as well of a number of English books and the founder of National Book Company.  He died in New York. 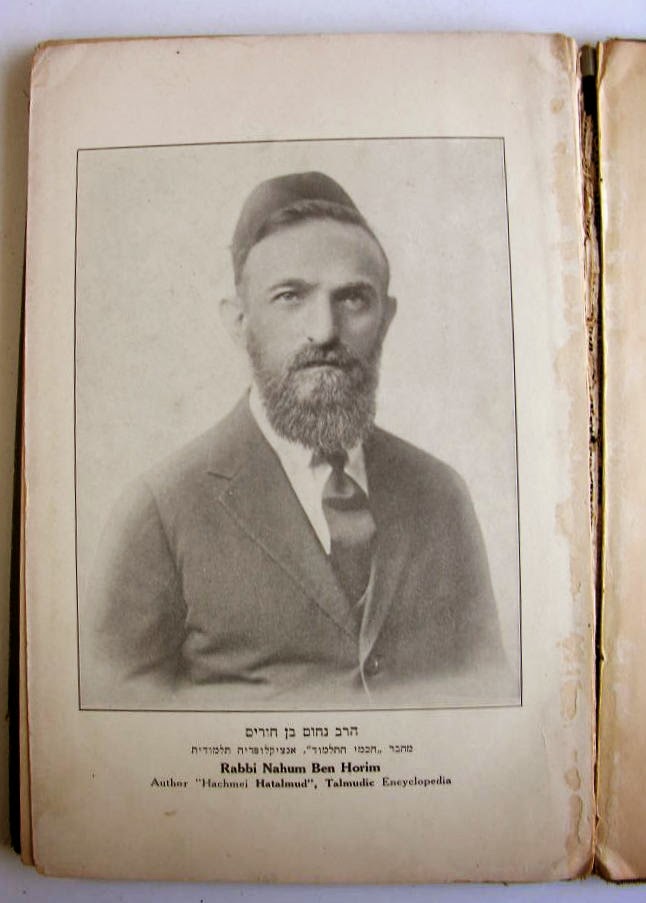