AVROM BLUM (ABRASHA, ABRASZA BLUM) (September 11, 1905-summer 1943)
He was best known by the name Abrasha (Abrasza).  Born in Vilna to well-to-do parents.  His father Avigdor was a manufacturer of candy and a Zionist activist.  He attended a modern religious school.  In 1919 he arrived at the Jewish high school of Sofia Gurevich.  Over the years 1921-1922, he belonged to a socialist youth circle led by the social-democratic Bund in Vilna.  From the autumn 1922, he was studying at the technical school in Altenberg, Germany, and from 1923 he was in Ghent, Belgium.  He graduated from the Ghent Polytechnicum with a degree in engineering.  He was chairman of the Ghent Jewish Student Association and contributed to student literary publications.  In 1930 he settled in Warsaw.  He was a member of the Warsaw committee of the Bund and of the central committee of the youth Bund: “Tsukunft” (Future).  He published articles in Yugnt-veker (Youth alarm), organ of “Tsukunft.”  In 1930s he served as secretary of the school run by Tsisho (Central Jewish School Organization) in Warsaw.  At the time of the outbreak of WWII and the siege of Warsaw, he saw to the publication of the Bund’s Folks-tsaytung (People’s newspaper).  Under Nazi domination, he became a legendary figure in the Warsaw Ghetto, very active building the underground organization of the Bund as well as a member of its central committee, and served as an editor of various illegal publications, such as: Byuletin (Bulletin), twenty-four issues, 1940-1941; Der veker (The alarm), thirteen issues, January-April 1942; Tsaytfragn (Issues at hand; first issue entitled Yunge gvardye [Young guard]); Der glok (The bell); Der shturem (The storm); Af der vakh (On guard); Yugnt-shtime (Voice of youth), issue thirteen, 1942; and Polish publications of the Bund (Za naszą i waszą Wolność [For our and your freedom] and Nasza Młodzież [Our youth]), among others.  He was one of the first who in 1940 called for an armed uprising against the Nazis.  In 1941, when an immense terror swept over the Warsaw Ghetto, he published a brochure, as an encouragement to the Jews in the ghetto, entitled Di parizer komune (The Paris Commune), 72 pp., published on thin, inferior quality paper (a second printing appeared in Warsaw in 1948, 76 pp., with a preface by Marek Edelman).  An illegal Polish publication reissued his appeal concerning the condition of Jews in the Warsaw Ghetto and propagated it over the English-language radio.  On August 8, 1942 he was caught and brought to Umschlagplatz (collection point in Warsaw for deportation) and from there sent to Treblinka, but he succeeded in escaping.  In October 1942, a coordinating committee to prepare for an uprising was created; if they tried to lead the remaining Jews in the Warsaw Ghetto into the gas chambers, he was the representative of the Bund in the presidium of the coordinating committee and in its propaganda commission.  He was active in preparations for the Warsaw Ghetto uprising.  As the ghetto fighter Vladke (Władysława Meed) would explain, he was the soul of the fighters’ group at 32 Świętojerska Street.  When the armed uprising broke out, he remained in contact with the Bund’s representative on the “Aryan side” of the city.  And, when the uprising ended tragically, he was among those who escaped to the Aryan side through the Warsaw sewers.  He was then set up in a secret apartment by Vladke, the underground woman fighter.
They were, however, informed on, and to save themselves they tied together bed sheets and he lowered himself down from the window.  The sheets came apart, and he fell to the ground injured.  They were both taken off to the police.  Vladke manage to save herself, but Abrasha was handed over by the Polish police to Gestapo men who killed him. 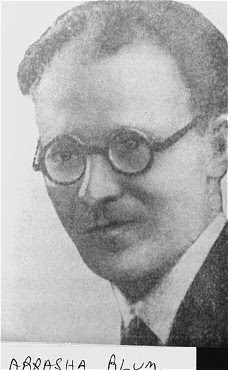