A. L. BEN-AVIGDOR (February 1866-September 23, 1921)
This was the pen name of Avrom-Leyb Shalkovitsh (Avraham-Leyb Shalkovich).  He was born in Zheludok (Pol., Żołudek; Bel. Žałudok), Vilna district.  Until age eighteen he studied Jewish subject matter in Zhetel (Zdzięcioł), Radin (Raduń), Kreve (Krevo), and Vasylkiv.  He later studied general subjects in Kovno and worked as a Hebrew teacher there.  After his marriage to Tsipora Blumgarten (Yehoyesh’s sister), they settled in Vilna.  They later moved to Warsaw, and there he commenced his publishing activities with the inexpensive editions of Sifrei agorah (One-penny books), 1891-1893, as he also brought out his own stories.  In their day, these Hebrew editions of works had enormous success; people dubbed them “Di ben-avigdorlekh” (The little Ben-Avigdors).  He published in these the best literary writings of that time, such as: Peretz, Frishman, Breinin, Shmuel-Leyb Gordon, and Ben-Avigdor himself.  He later founded the publishing houses of Aḥiasef and Tushiyah.  The latter exerted a great influence on modern Hebrew literature and publishing.  An outspoken Zionist and Hebraist himself, he nonetheless recognized the immense value of the Yiddish language and Yiddish literature.  Although he wrote next to no Yiddish himself (aside from a handful of articles published in his final years in the Warsaw Zionist Yiddish-language press, such as Dos yidishe folk [The Jewish people]), he was also the publisher of the weekly newspaper Yudishe folkstsaytung (Jewish people’s newspaper), with its weekly supplement Yudishe froyenvelt (Jewish women’s world), both edited by M. Spektor and Kh. D. Hurvitz (1902-1903), and he also published the first edition of Sholem-Aleykhem’s writings in four volumes, and they were added as a bonus for subscribers to his two weeklies.  In addition, the anthology Hilf (Help), edited by Sholem-Aleykhem, was published by the house “Folksbildung” (People’s education) which was a subsidiary of Tushiyah.  In 1905-1906, he brought out in Vilna the daily newspaper Di tsayt (The times) which, due to Tsarist repression, changed its name to Naye tsaytn (New times) and Yudishe tsaytung (Jewish newspaper), edited by Ben-Tsien Kats.  In 1908, he visited the United States for his own enjoyment.  In 1909 the “Hebrew Publishing Company” in New York brought out an edition of his stories in Yiddish: Nit kayn glaykhe por (No comparable match), 56 pp.; and Af dem vaybs keyver (On one’s wife’s grave), 91 pp.  He made his second trip to America in 1920 on behalf of Tushiyah which (since 1911) had been united with the Yiddish house of “Tsentral” (Central).  On his way home, in 1921, he was delayed by the Zionist Congress in Karlsbad, and there he died suddenly. 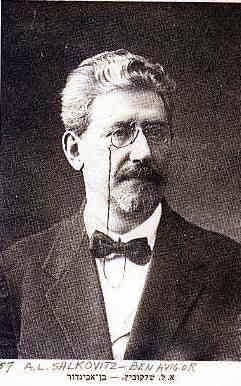