VLADIMIR GROSMAN (GROSSMAN) (May 26, 1884-January 22, 1976)
He was born in the Cossack town of Temryuk, by the Kuban River in the Northern Caucasus, where there was a small settlement of Jews who enjoyed the endowment of residential rights.  He studied in religious primary school and Talmud with his father who served as local ritual slaughterer and rabbi (later in Kerch).  He received his secular education in the state school and in high school in Kerch.  In 1904 during the anti-Jewish pogrom, he took an active role in Jewish self-defense.  After graduating high school, he traveled to Berlin where he studied for three years in an agricultural college.  He later studied at the Universities of Odessa and St. Petersburg.  Over the years 1906-1911, he served as secretary of the central committee of YIKO (Jewish Cultural Organization).  He worked in the emigration section of this organization, and on its behalf he traveled through Poland, Lithuania, and Bessarabia.  During the years of WWI, he worked as a medic for the Red Cross on the front in Poland.  After the war, he lived in Copenhagen, Denmark, and traveled throughout the Scandinavian countries.  He made a study trip, 1920-1921, to Canada.  In 1923 he lived in New York, and from 1924 for a time in Berlin, working for ORT (Association for the Promotion of Skilled Trades), and he then turned his attentions to journalism full-time.  He traveled a great deal and visited Israel as well.  He was the founder of the Parisian division of the Jewish Telegraphic Agency (ITA).  From 1936 he was head of ITA in Canada.  In 1946 he was, on assignment from ORT, working with survivors from the concentration camps in Germany.  He was awarded a medal from the Danish government and received an international prize from the French government for his book Pariz (Paris), which appeared as well in a Danish translation in Copenhagen (1950, 140 pp.).
His journalistic activities began in 1904-1906 in the Russian-language press of southern Russia, in the St. Petersburg newspapers—Rech’ (Speech), Rus’ (Russia), and Svoboda i Ravenstbo (Freedom and equality)—and in the organ of the Odessa territorialists, Golos Evrey (Jewish voice).  His first articles in Yiddish appeared in Fraynd (Friend) in St. Petersburg, using the pen name “Ben Elyahu.”  In 1907, while he was working for the emigration division of YIKO, he managed its Yiddish-language organ, Der yudisher emigrant (The Jewish emigrant).  He also contributed to the journal for emigration and colonization Vuhin (Whither), and he wrote for Novyi voskhod (New rising).  He was the correspondent in the Duma for Haynt (Today) in Warsaw, for Utro Rossii (Russian morning) in Moscow, and Tog (Day) in New York from its founding; during the years of WWI, he published articles in Tog, using the pseudonym “A. I.,” in which he exposed the Tsarist persecutions of Jews at the time.  When he was in New York in 1923, he worked as a domestic writer for Tog, and from 1924 he was the political correspondent for the newspaper in Berlin.  He was also the first editor of the daily newspaper Parizer haynt (Paris today) in 1926, editor-publisher of the magazine Zibn teg ilustrirt (Seven days illustrated) in Paris, and later in Canada for three volumes of Kanadishe idishe yorbukh (Canadian Jewish yearbook), 1940-1942.  From 1916 he published current events articles for Tsukunft (Future) in New York, and from 1917 he contributed pieces to the Danish and Norwegian newspapers and journals, such as Politiken (Politics) and Werdensgang (World time).  He frequently published articles in Fraye arbeter shtime (Free voice of labor) in New York.  He also published in Danish a book on the “new Russia,” a drama about Jewish life “At a Crossroads,” and in English a book entitled The Pan-Germanic Web: Remaking Europe (Toronto, 1944), 179 pp.  In Yiddish he wrote the pamphlet Yuden in kopenhagen (Copenhagen, 1918), 34 pp., and the volume Amol un haynt, zikhroynes un gendanken (Then and now, memories and thoughts) (Paris, 1955), 208 pp.; Georg brandes un peter Kropotkin (Georg Brandes and Pyotr Kropotkin) (Paris, 1961), 238 pp.; Mentshn un problemen, zikhroynes un gedanken (People and problems, memoirs and thoughts) (Paris, 1964), 183 pp.; Velt-yidntum in der velt-politik (World Jewry in world politics) (Paris, 1973), 298 pp.; In a nayer velt In a new world) (Paris, 1974), 215 pp.; Alt-naye problemen (Old-new problems) (Paris, 1975), 294 pp.  Among his other pen names: Z. Volf, V. Raiski, V. Oldemarov, G. Vladimirov, and the like.  He was living until his death in Geneva, Switzerland. 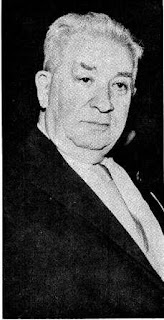