JULIUS GENS (GENSS) (November 17, 1887-February 3, 1957)
He was a lawyer, bibliophile, collector, and bibliographer from Tartu (Dorpat), Estonia.  He was the manager of the cultural office of the Jewish cultural administration (organ of Jewish autonomy in Estonia).  He was a member of the council of YIVO and a scholarly contributor to YIVO.  From around 1916 he turned to the collection of books, pictures, libraries, and other art and antique objects.  He was particularly interested in books about art.  In the 1920s he focused a great deal of attention on bibliography, and in the 1930s on Judaica.  He accumulated in his apartment in Tartu and in his villa in Tallinn a library that was the only one of its kind.  He published works on the history of art, bibliographical articles, and notices in Russian, Estonian, German, and Yiddish.  Among his writings was a four-volume description of his own library, under the title Katalog biblioteki i sobraniia Yulia Gensa (Catalogue of the library and collection of Julius Gens) (Tallinn, 1939), in which was also included detailed bibliographic notes about his books and periodicals in Hebrew and Yiddish.  He also published books: Hagada (Passover prayer and story book) and Yidishe bukhtsaykhns (Jewish book illustrations).  At the international YIVO conference in Vilna, the society “Friends of YIVO in Estonia” published (in Russian, with Yiddish on the title page) Udu Ivak’s Di yidishe prese in rusland (The Yiddish press in Russia), with a preface and bibliographical note by Gens (Tallinn, 1934), 104 pp.  He was also the author of a volume entitled Yidishe grafik (Yiddish graphics) (Tallinn, 1938).  In June 1939 he organized a Sholem-Aleykhem exhibition in Estonia (in Tallinn and Derpet).  For the show a beautifully produced catalogue was published, which included the autobiography of Sholem-Aleykhem in Estonia, translated by the well-known Estonia writer Friedebert Tuglas.  (A copy of this catalogue can be found in the YIVO archives in New York.)

[N.B. This entry concludes with Dr. Gens’s death in the Holocaust and notes that further biographical details are unknown.  In fact, he spent much of the war in Tashlkent, survived, and lived for another twelve years in his native Estonia—JAF.] 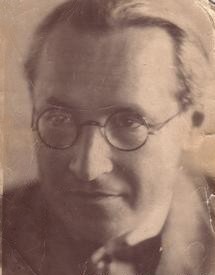