NOKHUM (NAHUM) GERGEL (April 4, 1887-November 18, 1931)
He was born in Rakhmestrovka (Rotmistrivka), Kiev region, Ukraine.  He received a traditional Jewish education.  He studied Talmud with the commentaries.  At age eighteen he became an external student.  He graduated from high school in 1909.  He was active in the Bund, later with the Zionist socialists.  He studied law at Kiev University, and he was active in the leading organs of the student organizations, in the “Ḥevra mefitse haskala” (Society for the promotion of enlightenment [among the Jews of Russia]), in the “Society for Regulating Jewish Emigration,” and the like.  In 1914 he graduated from the university and settled in St. Petersburg.  In January 1915, as plenipotentiary of the St. Petersburg Yekopo (Yevreyskiy komitet pomoshchi zhertvam voyny—“Jewish Relief Committee for War Victims”), he traveled to the front in the Kielce region.  He organized the defense of Jews against false accusations of spying, collected material on the persecution of Jews on the part of the Tsarist army, especially for those who observed eruv strictures and who had been seized on the order of head commander Nikolai Nikolayevich.  During the expulsion of the Jewish population from the Kovno region and from Courland, he came to Vilna.  He took part in working out a plan for the evacuation of refugees and deportees, and he left for the Poltava region to organize the reception of the evacuees.  He also participated in the first conference of the aid committee in Kiev.  In August 1915 he returned to Vilna.  In September 1915 he was designated plenipotentiary by Yekopo in the Minsk region.  From September 1916 he worked in the central committee of Yekopo in Petrograd.  At that time he was selected to be a member of the central bureau of ORT (Association for the promotion of skilled trades).
With the outbreak of the revolution in February 1917, he served as representative of the Zionist socialists in the Petrograd Soviet of workers and soldiers.  At the conference of Zionist socialists, he was elected to the central committee of the party, and later, following the unification with the Jewish Socialist Workers Party, to the central committee of the Fareynikte (United [parties]).  In July 1917 he was sent as the party representative to Minsk and there was a member of the All-Russian Constituent Assembly.  At the beginning of 1918 he was appointed director of the general bureau of the Jewish Ministry in Ukraine.  After the Getman Skoropadskyi coup d’êtat in April 1918, he was the actual manager of the Jewish Ministry, and to him later fell the fate to execute the work of dissolving Jewish autonomy.  In May 1918 he was elected to the presidium of the central Jewish aid committee “KOPE” (Society for aid to Jewish victims of military actions), and he was the general secretary of the committee until 1921.  During the great wave of pogroms in Ukraine in 1919, Gergel was a member of the presidium of the central Jewish aid committee for pogrom victims and manager of the central section for help on behalf of pogrom victims of the people’s commissariat for social welfare.  In December 1919 he was elected chairman of the Red Cross Pogrom Aid Committee, and he held this position until the committee was dissolved by the Soviet government in May 1920.  In July 1920 he was selected to be the representative to the community organizations in Yidgezkom (Jewish Social Committee [for the Relief of Victims of War, Pogroms, and Natural Disasters]) and later as well to its presidium.  Throughout his entire time serving in community and aid activities, Gergel consistently and systematically collected material data on the pogroms.  In February 1921, in line with a decision of these organizations, he withdrew from Yidgezkom and left Russia.  In late 1921 he arrived in Berlin.  Together with M. Kreynin and other community leaders, he created OZE (Obschestvo zdravookhraneniia evreev—Society for the Protection of the Health of the Jewish Population) abroad.  In 1922 he was elected to the presidium of OZE and named editor of Oze-byuletin (OZE bulletin).  He was also active in the Mizrach Jewish Historical Archives, where he stored his materials on the pogroms in Ukraine, and in other Jewish organizations.  In 1923 he was elected general secretary of the organizing committee of ORT.  In 1925 he came to the United States as a representative for ORT.  From 1926 he was considered an expert on Russian Jewish problems by the Joint Committee.
Gergel published articles in various newspapers and magazines, and he penned a longer monograph, entitled: Dos yidishe ministerium untern hetman (The Jewish Ministry under the Getman), which was not published because of the Bolshevik uprising.  Among his books: Di lage fun di yidn in rusland (The condition of the Jews in Russia) (Warsaw, 1929), 260 pp.  He was an active member of the Berlin committee for YIVO (Yidisher visnshaftlekher institute), and, at the YIVO conference in Vilna in October 1929, he was selected to be a candidate for governing board of YIVO, and a member of the economics-statistic section.  In Yivo-bleter (YIVO pages) (Vilna) 1.1 (1931), pp. 62-70, he published a work entitled “Yidn in der komunistisher partey un in komunistishn internatsyonal” (Jews in the Communist Party and in the Communist International); and Shriftn far ekonomik un statistik (Writings on economics and statistics) (Berlin) 1 (1928), he published “Di pogromen in ukraine in di yorn 1918-1921” (The pogroms in Ukraine in the years 1918-1921).  He also published valuable works in Tsukunft (Future) in New York and elsewhere.  He was one of the initiators and founders of Algemeyne entsiklopedye (General encyclopedia) and as an envoy traveled to the United States.  He died in Berlin. 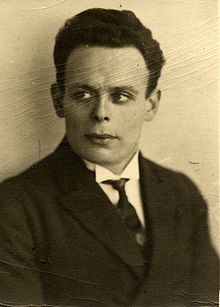