She was born in Bialystok, Poland, into a well-off commercial family.  She graduated from a Russian high school and studied Yiddish and Hebrew with private tutors.  During the years of WWI, she lived in Moscow.  There she graduated from the theater studio of Habima and later returned to Poland.  In 1918 she was active in the field of art theater.  She was one of the best known Yiddish actresses with her own distinctive style.  She traveled through the Jewish communities of virtually the entire world.  She authored a book entitled Tsu der groyser velt (To the great world) (Buenos Aires, 1952), 209 pp.  In the book she paints types and figures from the Jewish way of life.  In her memoirs about ten years of work with Habima, she refers to various episodes which throw light on her personality as an actress, on the accomplishments of Habima, and on her directors and fellow actors.  Portions of the book were published in Di idishe tsaytung (The Jewish newspaper) in Buenos Aires, Keneder odler (Canadian eagle) in Montreal, and Di shtime (The voice) in Mexico, among other such places.  Her book especially excels in her manner of depiction, her fine style, and her use of a folkish Yiddish language.  She also wrote the play Af fridlekhe erd (On peaceful soil), which deals with the problem of actual Jewish life.  It was staged in 1957 in Melbourne, under the direction of Yankev Vayslits.  From 1966 she was living in Israel.  She wrote: Mayn veg aleyn (My path alone) (Tel Aviv: Peretz Publ., 1968), 243 pp.  She died in Haifa. 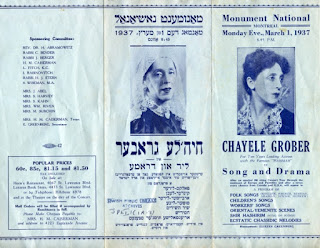