PINCHAS GRAYEVSKI (March 13, 1873-March 12, 1941)
He was a Hebrew and Yiddish writer, also known as Pinkhas Ben Yair.  He was born in Jerusalem, son of R. Tsvi Grayevski, the Slonim Rav, and Rokhl, daughter of the Pinsk Rav, R. Shloyme Leyb Parziber.  He studied in religious primary schools, with his father, and in the Etz-Chaim Yeshiva.  He was the author of a number of Hebrew-language texts.  He contributed to Hebrew newspapers and periodicals in Israel and outside the land.  He also placed pieces in newspapers in England and the United States.  He published his writings in notebooks, entitled Zikaron laḥovevim harishonim (Memory of the first lovers) (Jerusalem, 1933); Avne zikaron (Stones of memory) (Jerusalem, 1927-1930); Benot tsiyon veyerushalaim (Daughters of Zion and Jerusalem) (Jerusalem, 1927)—all treatises on a variety of Israeli personalities.  In Yiddish he published Mikhtavim meerets yisrael (Letters from Israel), a history pamphlet on Israeli Jewish organizations (Jerusalem, 1896), 34 pp.  He died in Jerusalem. 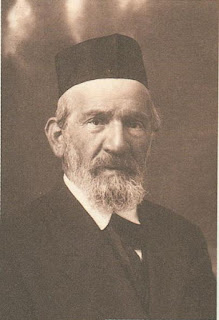