SIMKHE GRANYEVITSH (SYMCHA GRANIEWICZ) (1906-1936)
He was born in Ostrów Mazowiecka, Poland, into a well-to-do home.  In the 1920s he left for Uruguay, and from there, in 1928, for Argentina.  He taught Yiddish in the Borochov schools in Buenos Aires and Córdoba.  He spent a short period of time in Israel.  In 1932 he traveled to São Paulo, Brazil, and there contributed to the Yiddish press.  He subsequently returned to Israel.
He published stories and sketches of Argentine Jewish life in Di prese (The press) in Buenos Aires.  In book form, he wrote In roytlekhe farnakhtn (Reddish evenings) (Buenos Aires, 1929), 158 pp.  Several of his sketches appeared in Antologye fun der yidisher literatur in argentine (Anthology of Yiddish literature in Argentina) (Buenos Aires, 1944).  He died under tragic circumstances in Tel Aviv. 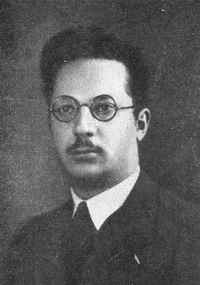