(KHAYE) KHAYKE GROSMAN (HAIKA GROSSMAN) (November 20, 1919-May 26, 1996)
She was born in Bialystok, Poland, into a well-to-do family.  She graduated from a Hebrew high school in Bialystok and for a time lived on a settlement training for work on the land in Palestine.  From her earliest years, she was active in the Zionist pioneer youth movement of Hashomer Hatsair (The young guard).  She was a speaker and lecturer.  At the beginning of WWII, she was in Vilna for a short time, later returning to Bialystok where she was a member of the command headquarters of the Jewish fighting organization.  She directed a partisan division in the forest around Bialystok, and later was in the leadership of the Bialystok ghetto uprising.  Thereafter she moved to Warsaw, where she served as a liaison officer to the headquarters of the Jewish fighting organization (Zhob) from the Aryan side.  After the war she represented Hashomer Hatsair in the central committee of Jews in Poland, and in May 1946 she participated in the Jewish delegation to the United States.  She was living in Israel from 1948.  She was a member of Kibbutz Loḥame Hagetaot (Fighters of the ghettos) in the Galilee.  She began writing in her youth in the publications of Hashomer Hatsair in Poland—in Yiddish, Hebrew, and Polish.  After WWII, she wrote for: Dos naye lebn (The new life), Al hamishmar (On guard), Unzer vort (Our word), and Mosty (Bridges) in Lodz (1946-1948), as well as Oyfkum (Arise) in Warsaw, among others.  Among her books: Anshe hamaḥteret (People in the underground) (Merḥavya, 1950), 417 pp., concerning the lives of Jewish underground fighters and partisans.
[N.B. There are German and English translations of this book.  Grosman went on become a Mapam member of the Knesset from 1969 to 1988 (with a break, 1981-1984)—JAF.] 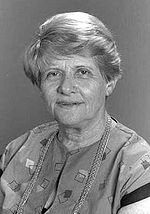