ALEKSANDER GRANAKH (ALEXANDER GRANACH) (April 18, 1890-March 14, 1945)
He was born in the village of Verbovits (Werbowitz, Werbiwici, Wierzbowce), eastern Galicia, the eighth child of a poor shopkeeper.  He studied for a short time in religious primary school in Horodenka where his parents had moved.  At age twelve he began working in a bakery.  It was in the Galician shtetls that he saw for the first time Yiddish and Ukrainian theater.  In Lemberg he joined a Yiddish acting troupe as a poetic declaimer, reading aloud poems by Morris Rozenfeld, Dovid Edelshtat, and Yoysef Bovshover, among others.  Later, in Berlin, he worked at night as a baker and during the days studied at Max Reinhardt’s drama school.  He was drafted during WWI into the Austrian army.  In the early 1920s he moved to Munich, later returning to Berlin, where he soon became known as one of the most powerful of stage artists.  Granakh did not, though, at that time cut off his contacts with the Jewish surroundings.  He visited Warsaw (1930) and New York (1931).  In these two cities he tried to perform in Yiddish and was close to Yiddish literary circles.  In 1934 he left the German stage for good.  He acted in Warsaw and in Lodz for a while, and he made a trip to the Soviet Union where he acted in the Kiev Yiddish theater.  In 1938 he came to the United States for the second time.  For a short time he played in Shaylok (Shylock) in Yiddish in New York.  He later lived for several years in Hollywood where he acted in a number of movies.  He returned to New York in 1945 in connection with the publication of his autobiography in English [There Goes an Actor].  There he suddenly fell ill and died on the second day after arriving at the hospital.  Even in his German years, Jewish society never stopped thinking of him as a Yiddish artist.  The Yiddish press in Poland frequently wrote about him.  From the early 1930s, he often published articles in Literarishe bleter (Literary leaves), and interviews with him and his talks in Yiddish appeared in Yiddish newspapers, especially after 1934.  In 1948 his autobiography was published in New York, Ot geyt a mentsh (There goes a man), translated by Yankev Mestl, 384 pp.  Granakh had written the book in German [Da geht ein Mensch], but in content and style the book is Yiddish through and through.  The first chapters were also a contribution to the description of Jewish Galicia of the past. 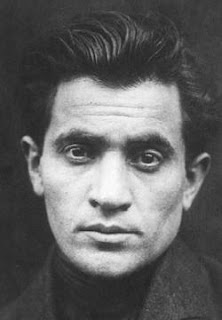