MEYER GRUNVALD (MAX GRUNWALD) (October 10, 1871-January 24, 1953)
He was born in Zabrze, Polish Silesia.  He graduated high school in Gliwice, and university and rabbinical seminary in Breslau.  In 1895 he became a rabbi in Hamburg, Germany.  He authored a great number of works on Jewish history and Jewish cultural issues in German, Hebrew, and Yiddish; he was a researcher into Jewish community life in Germany; he founded the Society for Jewish Folklore (Gesellschaft für Jüdische Volkskunde) which accomplished a great deal in the field of folk creation, folklore, and ethnography; and he was a cofounder of the Jewish Museum in Hamburg.  In 1911 he organized the Jewish division of the international hygiene exhibition in Dresden.  Until 1930 he was living in Vienna, where he took a productive part in Jewish community and cultural life.  He later settled in Israel where he devoted himself entirely to research on Jewish folklore.  He was the most ardent leader and research into Jewish folk creation, literally until the final days of his life.  He published a large number of works in various languages, including Yiddish, in which he traced Jewish folk creation and Jewish folksongs at an international forum.  He was the editor of Mitteilungen zur jüdischen Folkskunde (Notices on Jewish folklore) (Vienna, 1898-1922).  In Yiddish, he published in: “Fun m. l. ehrenraykhs literarishe yerushe” (From M. L. Ehrenreich’s literary heritage), Filologishe shriftn (Philological writings) 1 (Vilna, 1926), pp. 323-34, an important work with his own commentary; and “Shprikhverter un vertlekh fun dukle, mizrekh-galitsye” (Proverbs and saying from Dukle, eastern Galicia), Yidishe shprakh (Yiddish language) (New York, 1944), pp. 25-28.  A portion of his memoirs—entitled “Akhtsik yor lebn” (Eighty years of life)—was published in Yivo-bleter (Pages from YIVO) (New York, 1952).  He was also a regular contributor to the Hebrew folklore journal Yeda am (Folklore) in Tel Aviv.  His last work, “The Statutes of the Three Jewish Communities in Germany: Hamburg, Altona, Wansbeck of 1915,” was published in Yeda am (Nisan, 1953).  He died in Jerusalem.  He left behind in manuscript hundreds of writings on Jewish folklore and concerning the Jewish community in Germany. 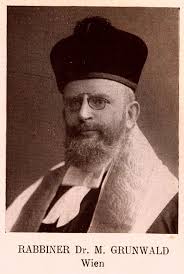