YITSKHOK VYERNIKOVSKI (ISAAK, ISAAC WIERNIKOWSKI, VERNE, WERNE) (1876-March 10, 1940)
He was born in Slonim, Grodno district, Byelorussia, into a family of scholars.  He was a student of the famed Rabbi Mortkhele Oshminer, from whom he received rabbinic ordination.  With the rise of the Zionist movement, he became an active Zionist leader, was a delegate to the first Zionist Congress in Basel, studied thereafter at the Universities of Heidelberg and Königsberg, and received his doctorate of philosophy.  In 1900 he moved to the United States and until 1908 lived in New York, where he worked as a Hebrew teacher, later opening a Yiddish publishing house and bookshop in partnership with Gordon, as well as the popular publisher “People.”  He was later a rabbi for several communities, such as Columbus, Ohio, and Dallas, Texas.  From 1924 until his death, he was administrator and head of rabbis in Los Angeles, California.  In his early student years he wrote in Yiddish the biography of Profesor herman shapiro (Professor Herman Shapiro), his life, aspirations, and influence on people (Berdichev: Ezra, 1898), 20 pp.  It was from that time was well that his semi-fictional booklet comes: Shaleshudes-tsayt (Time for the third Sabbath meal), a story with Zionist tendencies (Berdichev, 1899), 64 pp.  He was subsequently a regular contributor to Hatsfira (The siren) in Warsaw, in which—aside from short stories, philosophical pieces, and essays on literature—he also published novels with Zionist inclinations.  He placed pieces in: Yidishes tageblat (Jewish daily newspaper), Di natsyon (The nation), Dos idishe folk (The Jewish people), Hapardes (The orchard), Degel yisrael (Banner of Israel), Yavneh, Shaare tsiyon (Gates of Zion), Hatsofe leḥokhmat yisrael (The spectator for the wisdom of Israel), and Hadoar (The mail)—in New York; Kalifornyer idishe shtime (California Jewish voice) in Los Angeles; Fraynd (Friend) and Haynt (Today) in Warsaw; and Dos idishe folk (The Jewish people) in Vilna; among others.  He was the author of books in Yiddish, Hebrew, English, and German, among them: Das Buch Hiob (The book of Job) (Berlin, 1902), 160 pp.; Di idishe religye un ir moralishe bedaytung (The Jewish religion and its moral significance) (New York, 1905), 42 pp.; Siaḥ yitsḥak (The balm of Isaac), a treatise on Jewish issues according to Tanakh, Talmud, and homiletic writing (St. Louis, 1930), 72 pp.; Der rambam, tsu zayn akht hundert yorikn yubileum (The Rambam, on the 800th anniversary of his birth) (Los Angeles, 1936), 158 pp.  He was also the author of the textbook, Shaare tora (Gates of the Torah) (New York, 1907), and of the English-language textbook for youth, The Gates of the Holy Scriptures (New York, 1907-1908).  He contributed entries on Jewish philosophy, literature, and history to Otsar yisrael (Treasury of Israel) (New York, 1907-1913), and to the Encyclopedia of Jewish Knowledge (New York, 1933).  He was editor of the Hebrew monthly for art, scholarship, and literature: Haam (The people) (New York, 1908).  He left in manuscript a major encyclopedia work entitled Otsar hamikra betalmud uvemidrash (A treasury of verse in the Talmud and Midrash).  He died in Los Angeles. 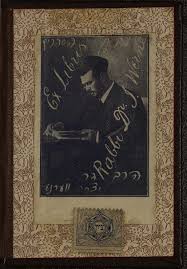