SHMUEL VINTER (1891-1943)
He was born in Vlotslavek (Włocławek), Poland, into a family of clergymen.  He attended religious primary school, studied at the yeshiva in Frankfurt-am-Main (probably only for a short time), and later enriched his knowledge through self-study.  Early on he turned his attention to commerce and later became a partner in the well-known firm of Nasiona which had grain storehouses in Danzig, Posen, and Włocławek.  He became wealthy, but always remained “attentive to the proletariat and the people’s street” (according to Meyer Kutshinski’s memoirs).  He supported writers and artists.  For a short time he was close to the Bund, which he would again approach in the 1930s.  He devoted his energies to building various Jewish cultural institutions in the city, and he was primarily active in the society “Friends of YIVO” in Włocławek.  With a large collection of religious texts, he possessed a rich library of rarities and old Yiddish documents.  He maintained the use of Yiddish in his business (letter forms and notices published in Yiddish), prodding all Jewish institutions in the city to make use of Yiddish in their business practices, and he convinced the post office of Włocławek to accept telegrams in Yiddish.  Vinter began his work as a writer in YIVO’s Filologishe shriftn (Philological writings) (Vilna): 1 (1926), pp. 319-24, a philological-folkloric work entitled “Kortn-shprakh” (Playing card language); 2 (1927), pp. 415-24, “Tsu der terminologye fun melokhes” (On the terminology of trades); and 3 (1929), pp. 585-88, “A bisl poylish-yidishe geografye” (A little Polish Yiddish geography).  In the 1930s he published in Vilner tog (Vilna day) articles specially focused on Włocławek as well as general Jewish topics.  In Yivo-bleter (Pages from YIVO) (Vilna) 8.1 (1935), pp. 92-93, he published: “Tsu der geshikhte fun tsvangs-ru um zuntog in poyln” (On the history of the enforced rest day on Sunday in Poland); and 4 (pp. 371-82), “A kuntres mit kheshboynes fun lubrontser kool fun 1818-1819” (A treatise on figures on the Lubraniec Jewish community, 1818-1819).  The last of these was a paper he delivered at a YIVO conference in Vilna in August 1935, at which he was a delegate from Włocławek and at which he was selected to be a member of YIVO’s central council.  Together with his essay “Pinkeysim fun kheyvres” (Record books of community societies), concerned with records kept by nine such groups in Koyave (Kujawy)—published in Yivo-bleter 12.1-2 (1938), pp. 77-94—this was part of a larger, planned, historical monograph “Yidn in koyave” (The Jews of Kujawy) which was, unfortunately, never brought to completion.  With his close friends Yikhezkl Brotshteyn and Khayim Tkhuzh, Vinter organized his own research expedition to a whole series of towns around Kujawy.  A sea of documents resulted from this expedition, some of which Vinter planned to publish.  WWII interrupted this work and the documents, apparently, have since disappeared.  His linguistic and folkloric research brought him to Noyekh Prilucki, and in the YIVO journal Yidish far ale (Yiddish for everyone), edited by Prilucki, two works by Vinter appeared: “Tsushriftn” (Postscripts) (June and July 1938); and “Pruv fun a vlotslavker idyotikon” (Effort at a Włocławek distinctive dialect) (February-March, June-July 1939).
When in 1941 the Nazis transported the Jews in the Włocławek ghetto to Warsaw, Vinter was among those transported.  He was very active in the Warsaw Ghetto on the “Jewish council,” at the office of provisioning (with Avrom Gepner), and especially at the food supply for Jewish laborers in the shops.  He was also an energetic contributor to the conspiratorial central archive, known as “Oyneg shabes,” led by Dr. Emanuel Ringelblum, with whom Vinter was in close contact.  He was very active as well in the Yiddish cultural organization in the ghetto: Vikor.  In the ghetto he kept a diary.  He began the diary in the summer of 1942 and gave it to a friend thereafter to bury somewhere in a concealed spot, but nothing of it has ever been discovered.  In 1943 he kept up his note-taking while in a bunker at 34 Świętojerska Street, and some of this material has been saved.  B. Mark restored the extant notes that are in the archive of the Jewish Historical Institute in Warsaw and wrote about them in in his Khurves dertseyln (Ruins recount) (Warsaw, 1945) and in the journal Bleter far geshikhte (Pages for history).  Those remaining notes come from the days of January 19-22, 1943, meaning the days of the first militant uprising in the Warsaw Ghetto, and to subsequent days and weeks until April 1943.  These notes—their encoding and deciphering—“played such a role for their time segment in miniature as did Ringelblum’s notes for the first period.”  Vinter supported an armed struggle and belong to the group calling for an uprising.  It is assumed that he died in the last uprising in the ghetto, but precisely when and under what circumstances remains unknown. 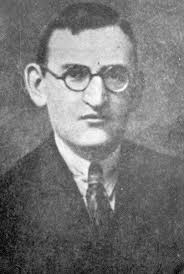