VLADKA (VLADKA MEED) (December 29, 1921-November 21, 2012)
Her proper name was Feygl (Feigele) Peltel Miedzyrzecki, born in Warsaw into an observant, comfortable family.  She graduated from a secular Jewish school.  She attended an occupational school run by ORT (Association for the Promotion of Skilled Trades), 1936-1937, and studied in an evening course for adults at the People’s University in Warsaw, 1938-1939.  In her youth she joined the Bundist children’s organization SKIF (Sotsyalistishe kinder-farband, or Socialist children’s union) and later the Bundist youth group Tsukunft (Future).  She lived in Warsaw until WWII, later being confined to the ghetto on the Aryan side.  She was a member of the underground committee of Tsukunft in Warsaw and served as liaison for the Bundist underground movement with the Aryan side.  She left Poland in 1945 and traveled through Germany to the United States (January 1946); she studied at the Jewish teachers’ seminary in New York.  She worked with YIVO, 1949-1950, in New York.  She began writing for Yugnt-veker (Youth alarm), later publishing in Folkstsaytung (People’s newpaper)—both in Warsaw.  In the United States, her work appeared in: Forverts (Forward), Tsukunft, Der veker (The alarm), Unzer tsayt (Our time), Der fraynd (The friend), Afn shvel (At the threshold), and Mir zaynen do (We are here) (collections of the association of Jewish concentration camp survivors, 1953, 1954-1955)—all in New York; in 10 yor froyen-divizye baym arbeter ring (Ten years with the women’s division of the Workmen’s Circle) (Los Angeles, 1947); and in 25 yor arbeter ring (Twenty-five years of the Workmen’s Circle) (New York, 1954), in which she published “Froyen in der untererdisher vidershtands-bavegung” (Women in the underground resistance movement).  In book form: Fun beyde zaytn geto-moyer (From both sides of the ghetto wall), with a foreword by N. Khanin (New York, 1948), 358 pp., in which she described the suffering in the Warsaw Ghetto and the subsequent ghetto uprising.  This work covered the period from July 22, 1942 until the beginning of 1945.  Chapters of it were published in the English-language press in America.  In 1959 this work was published by the Mendelson Fund in a Spanish translation in Mexico City.[1] 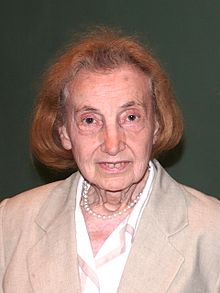