YANKL VYERNIK (JANKIEL WIERNIK) (1889-1972)
He was born in Biała Podlaska, Poland, into a poor working family.  Until age twelve he studied in religious primary school, later becoming a carpenter.  He joined the Bund in his youth, was also active in the trade union movement, and for this reason he was exiled by the Tsarist regime to Siberia.  He escaped from there and made his way to Warsaw where he worked for years, eventually becoming a master craftsman and contractor in the building of houses.  Until WWII he was a member the “examining commission of the board of Warsaw craftsmen.”  Under Nazi rule, he was confined in the Warsaw Ghetto, and from there he was deported in August 1942 to the death camp Treblinka.  He survived a year in Treblinka, because soon after his first day there the head of the camp saw in him an extraordinarily gifted craftsman.  In August 1943 he and a group of Jewish campmates organized an uprising at Treblinka, in which the Jewish camp laborers heroically fought with their axes and tools against the armed Nazis and Ukrainians.  Vyernik succeeded in escaping, and he described the uprising in a book entitled A yor in treblinke (A year in Treblinka) (New York: Unzer tsayt, 1944), 61 pp., with a foreword by the publishers.[1]  Prior to being published as a book, it was published serially in the Yiddish and Hebrew press throughout the world.  It appeared later in Polish, Spanish, English, [German, and French] translations.  It was the first authentic document of the unknown Nazi atrocities and at the time made a major impression on the world.  He remained active years afterword in his trade.  He lived Kibbutz Loḥamei Hagetaot (Ghetto fighters), near Acco, in Israel, where he constructed a model of the Treblinka camp.  He died in Rishon Lezion. 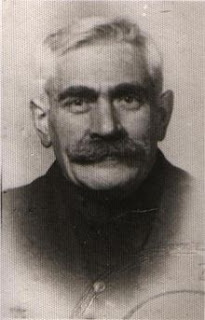 [1] It is unclear if he wrote this book initially in Polish (Rok w Treblince) or in Yiddish—JAF.
Posted by Joshua Fogel at 03:36