A literary scholar and prose author, he was born in Cracow, western Galicia.  His father Feliks (Felix), a wealthy merchant, belonged to the circle of enlightened Jews, following Germany, in the atmosphere of aggressive Polonization under the Austrian authorities.  Under the influence of the rising Zionist movement in the early twentieth century, he studied Jewish subjects privately.  From his first writings (in German), it was apparent that he was talented in Hebrew literature, especially in the Jewish philosophical literature of the Middle Ages.  Having completed middle school in 1910, Viner moved with his parents to Vienna where he expanded his Jewish learning further.  During WWI (1914-1917), he was studying philosophy at the University of Basel, Switzerland. His early poetry, written in German, was praised by the poet Hugo von Hofmannsthal (1874-1929). One of his first works, “Von jüdischer Prophetie und Mystik” (On Jewish prophecy and mysticism), a fragment of a larger work on intuition and concepts, was published in the January-February 1918 issue of the monthly Der Jüde (The Jew) in Berlin (edited by Martin Buber).  The pathos and thoughtful style of this work, as with all of his writings in this first period, was as far as can be from the Soviet Marxist terminology which was to dominate his later criticism and historical studies of Yiddish literature. When WWI came to an end, he returned to Vienna and began intensive, broadly conceived literary activity. In those first years after WWI, Viner contributed to a series of serious German periodicals.  At that time he was publishing (in German) essays on philosophical and historical topics, as well as mystical poetry. He contributed to Siegfried Bernfeld’s (1892-1953) monthly in German, and published an anthology of ballads on the lives of Jews in Spain, also in German. In 1922 together with one of the best known Jewish scholars, Chaim Brody (1868-1942) from Prague, he published an anthology in Hebrew entitled Mivḥar hashira haivrit (A selection of Hebrew poetry).  Over the years 1923-1925, he was living in Berlin as one of the editors of Klal Publishers. There he made his first personal contacts with Yiddish writers, the itinerant Russian-Jewish intellectuals: Perets Markish, Dovid Begelson, Leyb Kvitko.  He decided at that point to make his way to the Soviet Union, and there he embraced Soviet citizenship in 1926 and settled in Kiev. He quickly assumed a prominent place in Jewish cultural life. In 1927 he became the editor of Di royte velt (The red world) in Kharkov, and later an associate of the Institute for Jewish Culture.  A short time later he was nominated to be a scholarly contributor to the division of Yiddish literature in the All-Ukrainian Academy in Kiev.  Over the years 1928-1931, he directed the office of Yiddish language and literature in the Jewish section of the Pedagogical Institute in Kiev, where he was also a lecturer in Western European literature.  At the same time he contributed greatly to all the major Soviet Jewish journals and periodical publications.  Among other things, he published at this time: longer treatises on H. Leivick (in Di royte velt, 1927), Perets Markish, and Leyb Kvitko; as well as studies of the Yiddish classics and of Yiddish folklore. In 1929 he published his work, Vegn aksenfelds pyeses (On Aksenfeld’s plays) (Kharkov: Literatur un kunst). That same year, he brought out his second major work, “Sh. etinger, zayn ort in der yidisher literatur” (Sh. Etinger, his place in Yiddish literature). An important place was occupied by his monograph on Mendele Moykher-Sforim, a truly innovative accomplishment. He considered Mendele’s works as connected to the classical Jewish tradition in Russian and world literature. His most formidable feat was his great work, Tsu der geshikhte fun der yidisher literatur in 19th yorhundert (On the history of Yiddish literature in the nineteenth century). From 1933 he was living in Moscow where he was primarily working on his volume on Yiddish literature in the nineteenth century and issues concerning Soviet Yiddish literature.

To his important writings should also be added his folklore research, Problemes fun folkloristik, zamlung (Problems of folklore, collection), and concerning its literary heritage. Viner’s prose work also occupies a significant spot in his work—Ele faleks untergang (Ele Falek’s downfall), Kolev ashkenazi (Kolev Ashkenazi), and Baym mitllendishn yam (At the Mediterranean Sea), a novel about Jewish intellectuals in Western Europe after WWI, which he was unable to complete.

In June 1941, right after the attack by Hitler’s Germany on Soviet Russia, when he was forty-seven years of age, Viner did not wait to be drafted. Together with a number of other Jewish writers, he volunteered to join the army and left for the front. His last words, “This is a war for everyone’s happiness,” he published in the collection of Moscow Yiddish writers, Farn heymland, in shlakht! (For the homeland in battle!) (Moscow: Emes), dated August 9, 1941 to be printed. In September of that year he fell in the ongoing battle for the city of Vyazma. 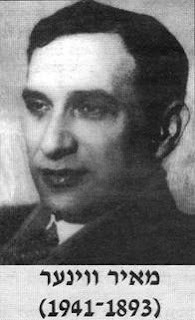