SHMUEL LEO DEUTSCHLÄNDER (1889-1935)
He was born in Berlin, Germany.  He descended from generations of rabbis.  He was orphaned in his youth and was raised in an orphanage in Altona.  He received a firmly religious education, studied in the universities of Berlin, Warburg, and Giessen from which he received his doctorate.  He later graduated from the Rabbinical Seminary in Berlin and received ordination.  In 1916 he was a professor at a Berlin high school.  After being drafted into the German Army, he came to Kovno as an officer, and there until 1918 he served as the head inspector of schools in Lithuania and educational manager of the department of Jewish school curriculum.  Over the years 1919-1922, he was lecturer at the conference of the Great Assembly of Agudat Yisrael in Vienna, and he was selected to be the leader of the Orthodox Beys Yankev school movement for girls, taught in Yiddish.  He managed the Beys Yankev Seminary in Cracow, as well as serving as lecturer in Jewish history.  He began his literary activities in German, with his Jüdisches Lesebuch (Jewish reader) (Berlin, 1918), 179 pp.; and later he published Goethe und das Alte Testament (Goethe and the Old Testament) (Berlin, 1923), 199 pp.  He also published at that time in Israelit (Israelite) in Frankfurt.  In 1923 he started writing in Hebrew and in Yiddish, and he contributed articles on pedagogy and general Jewish issues to: Haderekh (The way) in Vienna, Haneeman (The faithful) in Telz (Telshe), Dos yidishe togblat (The Jewish daily newspaper) in Warsaw, and to the journal Beys yankev (House of Jacob) in Lodz, and elsewhere.  He was also the author of a number of pamphlets and textbooks in Yiddish for Beys Yankev schools in Poland.  Through instruction in Yiddish in the Beys Yankev schools, he fought against language assimilation among the Hassidic young women in Poland.  He died in Vienna. 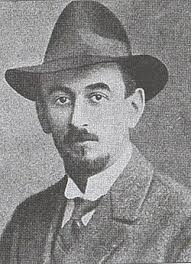