YOYSEF (JÓZEF) SANDEL (September 29, 1894-December 2, 1962)
He was born in Kolomaye, Galicia, to a father who was a furrier.  He attended the Baron Hirsch School and graduated from high school.  He became interested while still in his youth in painting and sculpture.  Together with the artist A. Granakh, he organized self-defense in Kolomaye against anti-Jewish excesses in 1918.  Around 1920 he moved to Germany and studied in Dresden, where he initially engaged in various trades and where (1924-1925) he brought out a literary-artistic periodical in German.  He later lived in France, Switzerland, and Austria.  He returned to Dresden in 1928 and established there the “Young Art Gallery.”  In 1934 with the Nazi persecutions, he made his way to Yugoslavia.  In Belgrade he put on several shows.  In 1935 he went to Poland, lived in Vilna and Warsaw.  In 1939 he worked as director of a photo exhibition in Kuzmir (Kazimierz) by the Vistula.  During WWII he lived in Karakum, Kazakhstan, where he was a teacher of German in a middle school.  In 1946 he came to Warsaw, served as president of the revived “Jewish society for the spread of art,” and led the art division of the Central Jewish Committee in Poland.  He assembled over 1,000 works of art, mostly by painters and metalworkers who were murdered during the German occupation.  Aside from exhibitions of the assembled artwork—one for the fifth anniversary of the Warsaw Ghetto uprising—Sandel organized the “Gallery of Jewish Art” in the building of the Jewish Historical Institute in Warsaw.  He also stimulated and then ran a competition for portraits of Mendele Moykher-Sforim, Y. L. Perets, Ḥ. N. Bialik, and Sholem Asch.  From 1953 he was employed to adapt the history of Jewish art in Poland.  In the 1930s he wrote treatises on art in German journals, and in Yiddish he placed work in: Haynt (Today), Moment (Moment), Literarishe bleter (Literary leaves), and Foroys (Onward)—in Warsaw; and Tog (Day) and Tsayt (Times) in Vilna.  After the war he contributed to: Di naye lebn (The new life), Oyfgang (Arise), Folks-shtime (Voice of the people), Yidishe shriftn (Yiddish writings), and Bleter far geshikhte (Pages for history)—in Warsaw.  His writings on the Polish Jewish painters Aleksander Lesser and Maurycy Minkowski were republished in Pinkes varshe (Records of Warsaw) (Buenos Aires, 1955), in which he also published “Varshever yidishe kinstlers unter der hitleristisher okupatsye un yidishe plastikers in varshe” (Warsaw Jewish artists under the Hitler occupation and Jewish sculptors in Warsaw).  He also published work in Polish academic publications.  In book form, his work includes: Shmuel hirshenberg (Shmuel Hirshenberg), with reproduction (Warsaw: Yidish bukh, 1952), 31 pp.; Yidish motivn in der poylisher kunst (Jewish motifs in Polish art), fifteen monographs on Jewish painters with fifty reproductions (Warsaw: Yidish bukh, 1954), 306 pp.; Umgekumene yidishe kinstler in poyln (Murdered Jewish artists in Poland), two volumes, with 175 monographs on Jewish artists and 166 reproductions (Warsaw: Yidish bukh, 1957), 562 pp. together; Plastishe kunst bay poylishe yidn (The plastic art among Polish Jews), with sixty reproductions (Warsaw: Yidish bukh, 1964), 200 pp.  “Every historians of the Jewish plastic art in the first half of the present century,” wrote Leo Kenig, “will have to resort to the work of Y. Sandel on our suffering artists.”  He died in Warsaw. 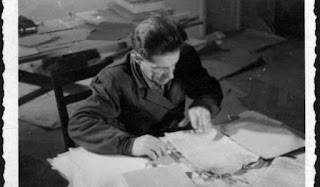