HANNA G. SALUTSKI (HANNAH SALUTSKY) (January 2, 1880-June 28, 1953)
She was born in Medzhybizh (Międzyboż), Podolia region, Ukraine.  Her father, Menakhem Mendl Goldenshteyn, a merchant and adherent of the Jewish Enlightenment, saw that she received a basic Jewish education, with Hebrew, Tanakh, and the like.  In 1896 she immigrated to the United States, worked in various sweatshops and in a photography studio, and continued her education on her own.  Over the years 1906-1907, she was secretary of the central association of Bundist organizations in America.  She studied (1912-1913) at the School for Social Sciences in New York, which later became a part of Columbia University, where thanks to her talents and experience in community matters, she was accepted without the necessary diploma and received a stipend from the school.  She completed her studies with a dissertation on emigration from Eastern Europe and a fellowship to further her research on issues of immigration; she later became active in the Jewish Socialist Federation, of which her husband Jacob Salutsky-Hardman was a cofounder (1921) and whom she helped in his community and literary work.  She subsequently became interested in questions of pedagogy and wrote about education in the organ of the Workmen’s Circle, Der fraynd (The friend), and in the organ of the Jewish Socialist Federation, Di naye velt (The new world)—she also published there, among other items, semi-fictional writings under the title “Kinderishe neshomes” (Childlike souls).  In book form: Dos kind, fizishe ertsihung, afn grund fun di beste meditsinishe oytoriteten, tsugepast tsu di baderfenishn fun der idisher muter (The child, physical education, on the basis of the best medical authorities, adjusted to the needs of the Jewish mother) (New York: Workmen’s Circle Library, 1920), 194 pp.; Gaystike ertsihung fun kind, kinder-psikhologye, ertsihungs-badingungen (Spiritual education of the child, children’s psychology, educational conditions) (New York: Dos kind, 1920), 221 pp.; and she compiled for the elementary level of Yiddish, Bukhshtabn- un verter-shpil far heym un kinder-shul (Letter- and word-play for home and elementary school) (New York: Dos kind, 1921).  Using the name A. Goldvin, she translated Henrik Ibsen’s Boymayster solnes (Master builder [original: Bygmester Solness]) and Rozmersholm (original: Rosmersholm) both: (New York: Mayzel et kompani, 1910).  For a time she ran a Montessori school in English.  Over the years 1922-1943, she managed summer camps for children and engaged with a great deal of experimental pedagogy.  She died following an operation in New York.  She was the wife of Jacob Salutsky-Hardman.  Their daughter was a doctor of biology and an English-language author, initially under the name Yvette Edmonson, later Virginia Mishnun (d. 2003). 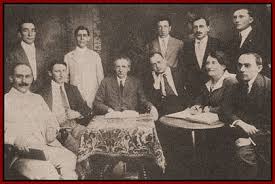